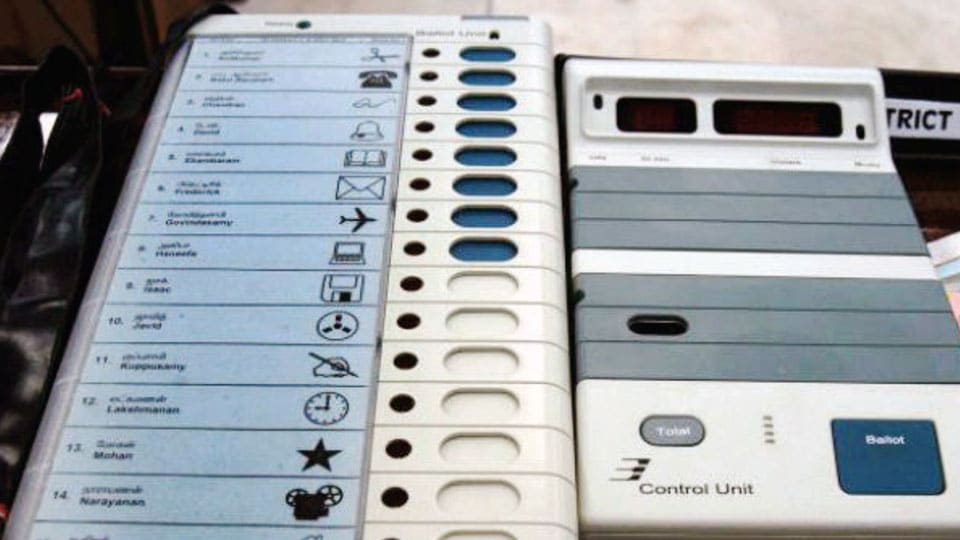 Double EVMs to be used in Krishnaraja and Varuna

Mysuru: A large number of independent candidates contesting the May 12 Assembly election has forced the Election Commission to use more than one Electronic Voting Machine (EVM) in booths. The Commission has to use double EVMs as they cannot deny a candidate his democratic right to contest and his/ her name, photograph and poll symbol has to be included in the EVMs.

One EVM can hold a list of 15 candidates with one button  for NOTA (None Of The Above). If the number of candidates is above 15 for example, the Election Commission has to make a provision of double EVMs.

While there will be two ballot units (EVM), there will be only one control unit that will store the data. Also, there will be two Voter Verifiable Paper Trail (VVPAT) machines. The arrangements of double EVMs and the related equipment have to be made at all the polling booths in Krishnaraja and Varuna constituencies.

Varuna has the highest number of candidates (23) with the prominent being Dr. Yathindra Siddharamaiah, son of Chief Minister Siddharamaiah from the Congress, Thotadappa Basavaraju from the BJP and Abhishek S. Manegar from the JD(S). Eight candidates are in fray from smaller parties and the remaining 12 are independents.

In Krishnaraja, there are 19 candidates with the prominent being S.A. Ramdas from BJP, incumbent MLA M.K. Somashekar of the Congress, and K.V. Mallesh from the JD(S). Six candidates are in the fray from smaller political parties and the remaining 10 are independents.

In the high-profile Chamundeshwari where Chief Minister Siddharamaiah is pitted against incumbent JD(S) MLA G.T. Devegowda, there are 15 candidates in fray and the Election Commission can make a provision for only one EVM here.  Likewise in Chamaraja and Narasimharaja, there are 14 candidates including Independents in the fray.

Speaking to SOM this morning, ADC T. Yogesh, who is also the Dy. Electoral Officer, said that the process of inserting the serial numbers, names, party symbol and candidate photo was in full swing and the EVMs are being checked thoroughly by the engineers from Bharat Electronics Ltd. and Electronics Corporation of India Ltd. and also officials from Election Commission.

Firstly, the machines are cleaned and earlier results are cleared. Switches, buttons, cables and latches are inspected for damage. After the insertion of candidate list with symbol, name and party of the candidate is inserted into the ballot paper screen, the ballot unit is closed and checked, officials said.