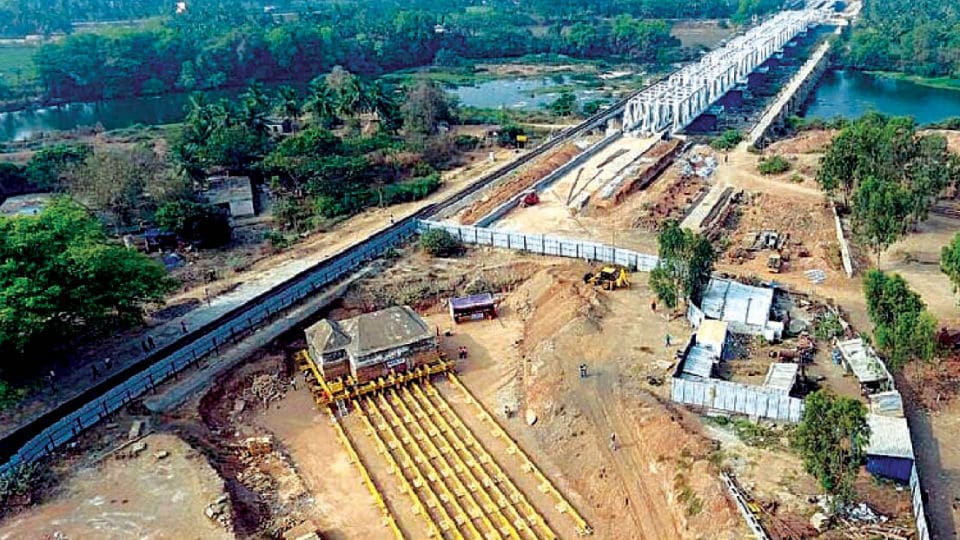 Mysuru: The Commissioner of Railway Safety (CRS) will inspect the only remaining stretch of the second railway line between Mysuru and Bengaluru near Srirangapatna by the end of October, paving way for the complete electrification of the route. Railway sources said that the CRS visit will happen anywhere between Oct. 23 and 28.

It is a small but vital stretch as it involves doubling of the entire line. This will lead to an increase in line capacity. Also, there are two important bridges that are important from a safety point of view. If all goes well, Railways will get a green signal to run trains on the stretch within a week after inspection. Officials said electrification works on the two lines were almost complete and the CRS would be invited for inspection by December. They said that the major works between Yeliyur and Mysuru were nearing completion. Electrification will not only turn Bengaluru-Mysuru railway journey green but also reduce about 30 minutes of travel time of three trains. Three daily trains — Shatabdi Express and Cauvery Express (between Chennai and Mysuru) and Chamarajanagar-Tirupati Express — undergo engine change from electrical to diesel or vice versa in Bengaluru. The electrification will save this  ‘engine change time.’

The 139-km stretch between Mysuru and Bengaluru has high traffic density with nearly 27 pairs of trains (including weekly and bi-weekly services).

Some minor yard works and traction substation works are in progress and the Railways may get necessary approvals by Electrical Inspector to the Government of India by the end of November. Inspection can be planned tentatively in the last week of November, the Railway officials said.

Electrification of lines between Bengaluru and Mysuru will also boost suburban service. Once electrification between Yeliyur and Mysuru is completed, Mainline Electric Multiple Unit services that are currently terminating at Ramanagaram can be extended to Mysuru, officials said.