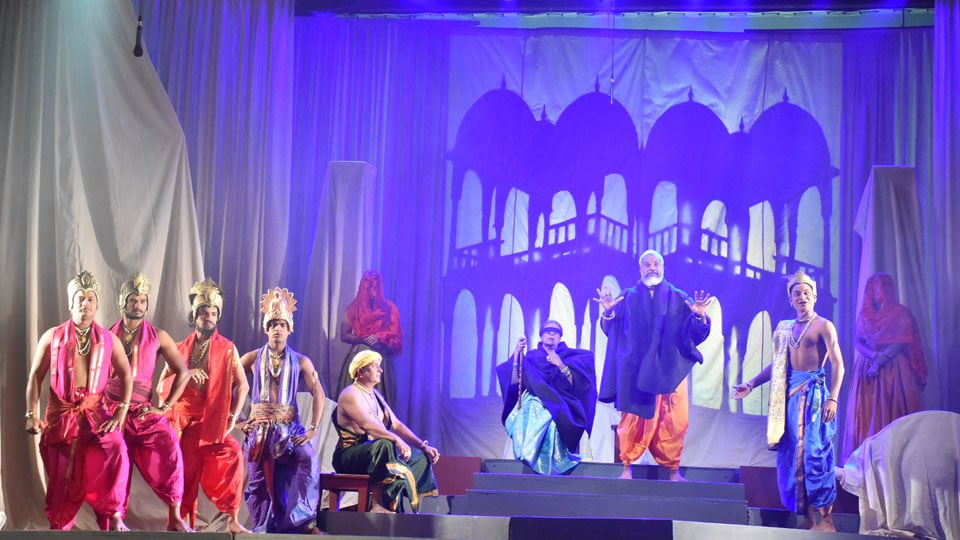 Mysore/Mysuru: It was a dream come true for thousands of theatre-buffs as the first show of the theatrical form of ‘Parva’, written by noted Kannada novelist Dr. S.L. Bhyrappa, was successfully staged at Kalamandira in city this morning.

“I hereby declare the play open.” This one line statement was made by Dr. Bhyrappa from the first row of the 821-seating capacity auditorium amidst the thunderous applause by the packed audience. Fans of S.L. Bhyrappa Sahitya Pratishtana had purchased 50 tickets of Rs.1,000 each; Rs. 500 tickets were sold out. Hardly, a few seats in Rs. 250 ticket section were vacant. The novel, written in 1979, has been brought into theatrical form and directed by noted director Prakash Belawadi.

Making an introductory speech, Addanda C. Cariappa, Director, Mysuru Rangayana said though, Kalamandira was not suited for staging dramas, still they made efforts to bring it before the audience. “Kindly, bear with us if you find problems with lighting or sound.”

Talking to reporters during the first tea break, Dr. Bhyrappa said the drama has come out very well. “I had seen the rehearsal but since then there has been lot of improvements. My novel has been successfully adapted into drama style and well-directed by Prakash Belawadi. The artistes have played their roles well. ”

“We won” was the first reaction of Cariappa to media. He said response has been very good. Out of the total five parts, the first part, Adi Parva is over. Four other parts are in the process.

P. Seshadri, a noted film director said, it was very difficult to bring a novel into theatrical form. Prakash Belawadi has been successful in this endeavour. It is very exciting to watch the 42-year-old Kannada novel being brought out in drama form. A minimum of 20 hours is required to bring such a big novel into a drama format and Belawadi has been able to tell everything in just seven hours.

A.K. Monnappa, a retired IAS officer, said he has so far read 500 pages of ‘Parva’ novel and whatever he had read has been presented in the form of play.

An elated Prakash Belawadi said, “I am happy people have accepted it. I was tensed since many days; now I am a bit relieved.” The play, which began at 10.30 am, will go on till 6.30 pm with four breaks.