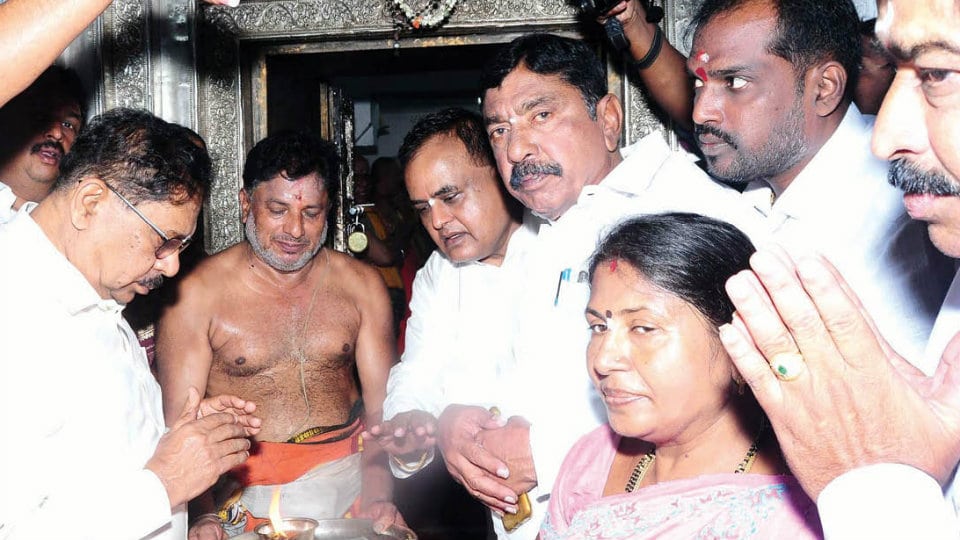 Nanjangud: On the last Kartika Monday today, Congress MLA and former Deputy Chief Minister Dr. G. Parameshwara visited the famous Srikanteshwara Temple in the town this morning and offered prayers to the deity.

Later speaking to press persons, Dr. Parameshwara, replying to a query on his absence from the by-poll campaign, said that he was beginning his campaign today from Hunsur, which is going to the by-polls along with fourteen other Assembly segments of the State on Dec.5.

When asked about the number of seats that the Congress would win, he merely said that everything will be known on Dec.9, when the counting of votes will be taken up.

Replying to another question on reported confusions in the Congress and also that Opposition Leader Siddharamaiah is a loner in the Congress campaign, he  dismissed such reports saying that every top leader of the Congress was actively campaigning for the party and there were no confusions.

When reporters sought to know the Congress stand on forming a fresh Government if the party wins more seats in the by-polls, Dr. Parameshwara said that the party will take a stand only after the by-poll results are out.

Former MLA Kalale Keshavamurthy, leader Venugopal from Bengaluru and others  were present.