Home » Columns » Abracadabra By K. B. Ganapathy » Dr. S.L. Bhyrappa: A legend in his own lifetime among novelists —2 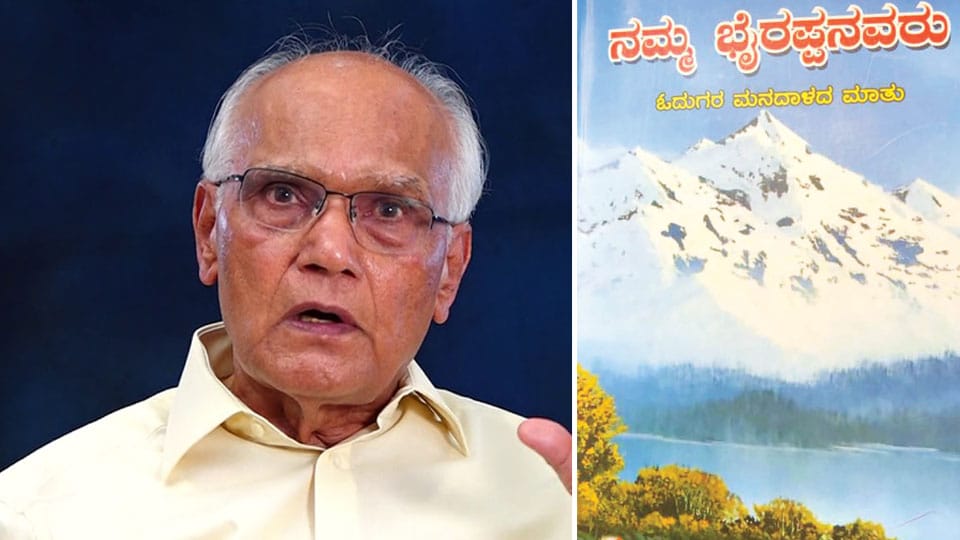 Dr. S.L. Bhyrappa: A legend in his own lifetime among novelists —2

We the readers of this book ‘Namma Bhyrappanavaru’ get to know what were the benefits derived by Dr. Bhyrappa’s readers, who had suffered the same kind of poverty, hardship, personal deprivations and humiliations like the characters in the story. ‘Bitthi’ was his autobiography and too melancholic to begin with and yet that ‘miserable creature’ the protagonist (here Bhyrappa himself) surmounts all the hurdles and succeeds in life, succeeds in a very big way to become a legend in his own lifetime, now at 90. He is indeed a role-model to those who blame their situation of birth, family and FATE for their failures in life. After all as Leo Tolstoy says, “All happy families are alike, each unhappy family is unhappy in its own way.” There could be persons whose situations in life were worse than Bhyrappa’s.

Most of Dr. Bhyrappa’s books, from what I understand from Dr. Vijaya Haran’s book, is like a balm, a road-map for those unhappy families as to how to improve their lot and move on in life, like Bhyrappa himself did. These books gave hope and confidence to many readers who had identified themselves with some of the characters in the book. From that point of view Bhyrappa’s books are not only good novels to read and enjoy but also a beacon light to those who are caught in the rough and stormy sea of life. Thank you sir. What Mahatma Gandhi has done to mankind as a messenger of peace, what Swami Vivekananda has done to the mankind as a propounder of spiritual life, you, through your novels, with a nuanced  message, have done to many groping in the dark to find their way in life. Articles in this book speak eloquently about the benefits those readers derived after reading your books.

Writing about this book in the beginning at length Dr. Pradhan Gurudutt has written the criticism Dr. Bhyrappa faced from his detractors (who allegedly blocked Jnanpith Award, being given to Bhyrappa) as a Rightist, Reactionary and the most silly criticism from a Jnanpith Awardee that Dr. Bhyrappa is merely a debater, not a novelist. No one need to take these criticisms seriously for it is obvious a Left-liberal lobby in the field of textbook writing, history writing, art and literature has been operating since the days of Congress rule in this country. And then listen to what Somerset Maugham, a great writer, said of criticism: “I would rather be criticised than ignored.”

And finally, sex in Dr. Bhyrappa’s novels. This too has been discussed by puritans and Bhyrappa baiters. After all sex is a primordial urge, basic instinct, in all organisms and animals. And man is an animal. Socrates says, social animal. Therefore, when you write a story where humans play roles, how can you exclude sex. In some context or situation it has to manifest. Bhyrappa handles sex in his novels in a very subtle, circumspect manner but sometimes, I am told by a lady, rather explicitly (as if the skill came to him through ‘Parakaya Pravesha’ of Shankaracharya kind!). A mention is made about this aspect of his writing by Dr. H.V. Nagaraja Rao in this book. He had asked Bhyrappa why he had characterised the famous singer in his most admired and award winning book ‘Mandra’, translated to many languages, including Sanskrit, as a profligate, debaucherous person. “Thereby, you have made the musicians as suspects of immoral conduct in the  eyes of your readers…” There was no mincing of words in Dr. Bhyrappa’s answer. It was like a bullet! “I am not saying all artistes are immoral or characterless. But I know some artistes who are very famous being womanisers. You may not know the life of these famous artistes. But I know. In my description there was no wanton deprecation or exaggeration.”

Some of my readers may think that as a local journalist of now 43 years and Dr. Bhyrappa being a famous litterateur of Mysore, I would have interviewed him. No. My friend in Mumbai had told me to avoid interviewing great writers and great politicians for they are highly presumptuous and sometimes even curt. Since then I bought my peace. Dr. Bhyrappa is a great writer.

Dr. Vijaya Haran, while reminding me about this article hinted that I also include my personal contact with Dr. Bhyrappa. Hence, this post script of sort.

I first heard of Dr. Bhyrappa as a great novelist in Pune where I saw his film ‘Vamsha Vriksha’ being exhibited as morning show in Nataraj theatre, spoken as owned by a Kannadiga by name Shinde, on Jangli Maharaj Road. I was mesmerised by the film. What a story and what a direction! Thereafter, it was my sister-in-law Rajani, who studied English literature from the Regional College of Education in Mysuru, who verbally introduced Dr. Bhyrappa and Dr. U.R. Ananthamurthy in superlative terms as if they were the ultimate teachers and writers in Kannada. I had not read a single book of both these writers as I was rather an Anglophile reading R.K. Narayan and other novelists writing in English. It was much later I read ‘Aavarana’ and other two books of Bhyrappa. However, I had not seen him personally at all, though I used to meet his eldest son occasionally in Kuvempunagar.

It was my friend Mohan, journalist (working for UNI, The Hindu, Financial Times and writing a column for Star of Mysore) who invited me for a dinner in his house in Saraswathipuram saying ‘Bhyrappa is coming’. I went and found Mohan on appetiser and Bhyrappa was ensconced in an armed chair kept against the wall with a small table on the side. I was introduced and the response was casual, not warm. Mohan by nature was a talkative man and a singer too, fond of film songs. Bhyrappa spoke little and I had nothing to talk as much of it was done by Mohan! I parted soon after dinner. Later I had seen him from a distance while on his morning or evening walk and at close in a couple of functions where I was also a guest of honour looking like an apology in Dr. Bhyrappa’s august presence. I learn, by nature he is a private person,  soft spoken but a good public speaker. Now 90, may he live to be a centenarian and then cross the Vedic lifespan of 120 as I wish him many happy returns of the day.

Last Word: Moderation in praise or criticism is a virtue. The book may be a credible tribute to Dr. S.L. Bhyrappa without that ‘ಏನೀ ಕೌತುಕ?’

And Mount Everest for cover picture? A metaphor for Bhyrappa? A good picture of Bhyrappa on the cover would help sales!

ABRACADABRA Dr. S.L. Bhyrappa K.B. Ganapathy
When will Mini Vidhana Soudha elevator start working?
The main tips on how to write a dissertation