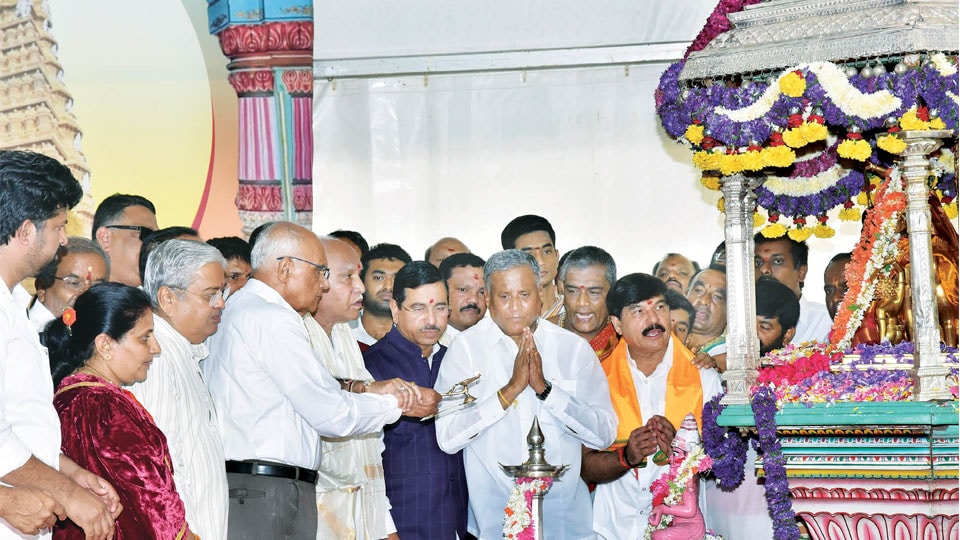 Mysuru: Celebrated Kannada novelist and Saraswathi Samman awardee Dr. Santeshivara Lingannaiah (S.L.) Bhyrappa inaugurated the 10-day Dasara Naada Habba-2019, atop Chamundi Hill by offering floral tributes to the idol of Goddess Chamundeshwari  (Utsava Murti) at 9.35 am in the auspicious Vrischika Lagna this morning, in the presence of Chief Minister B.S. Yediyurappa and other dignitaries.

The idol was placed inside a flower-bedecked silver chariot in the premises of Chamundeshwari Temple. Speaking after the inauguration, Dr. Bhyrappa made a fervent appeal to maintain the sanctity of Chamundi Hill as a devotion destination and not to convert it as a tourist destination.

Taking strong exception to   the attempts being made to commercialise Chamundi Hill, Dr. Bhyrappa appealed to the Government to save the Hill from destruction.

Bhyrappa, who is known for his vociferous comments and don’t-care attitude, touched upon 12th century reformer Basavanna’s preachings and said, “In India, if at all there are people who don’t have work ethics, they are politicians. Politicians are unprincipled and do not follow the “Kayakave Kailasa” (work is worship) as preached by Basavanna,” he told the VVIPs on stage, all of them who were politicians.

Pointing out that farmers are at the core of ‘Kayaka Samaja’, as they take to fields even before sunrise, Bhyrappa regretted that politicians have destroyed the work ethics of farmers by luring them into petty politics during elections and after.

Asserting that no one can say that he (Bhyrappa) is not a believer of God, Bhyrappa maintained that some rationalists may not believe in the existence of God, but it was left to their choice.

On women and gender

Bhyrappa recalled the recent row over allowing women irrespective of age group to Sabarimala Ayyappa Swamy Temple in Kerala. “The Communist Government in Kerala should not have intervened in the matters of faith”, said Bhyrappa.

There is a myth that the present society is misogynist. In reality, it is false to construe like that as women have taken lead in many fields. For example, girl students enrol in large numbers against male for professional courses. “We offer our first prayers to Goddess (Hennu Devathe) as we see nature in the form of a female. Women are given a special space in all matters and it was not correct to say that women are victims of gender inequality,” he said.

Earlier, Dr. S.L. Bhyrappa, accompanied by his wife Saraswathi and Chief Minister Yediyurappa were given ‘Poornakumba’ welcome to the Chamundeshwari temple, where they offered prayers to the deity.

Over 15 Mahisha Dasara propagators, who were reportedly planning to stage a black flag demonstration against Dasara inauguration, were taken into preventive custody by the Police atop Chamundi Hill last evening. Following intelligence report that several activists of Mahisha Dasara Samithi were planning to disrupt the inauguration, the Police swung into action and took them into preventive custody. They were released this morning.