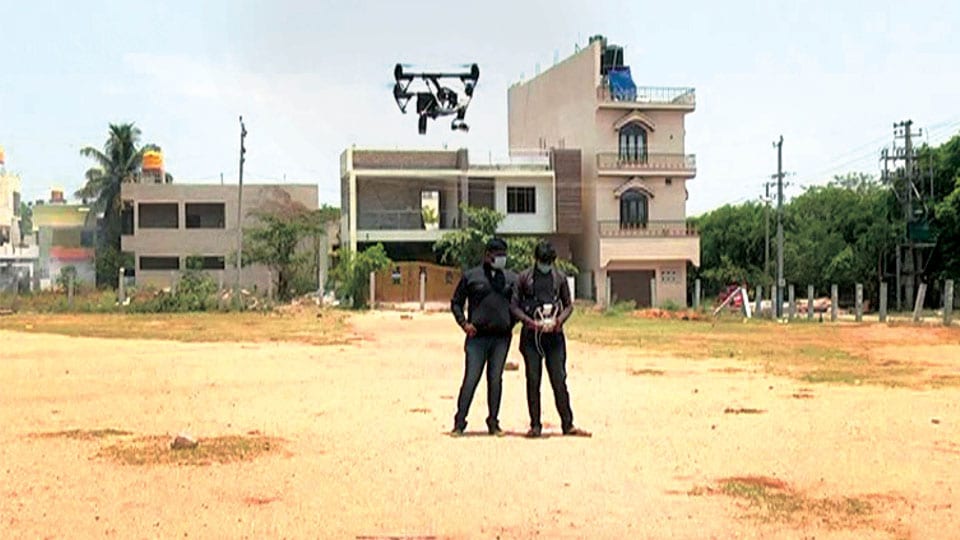 Mysore/Mysuru: They have been seen on the streets relentlessly seizing vehicles and grimly talking sense into compulsive lockdown violators. The Police in city have also started using a network of Unmanned Aerial Vehicles (UAVs or drones) to track down lockdown flouters.

The drones are fitted with sirens, flashing lights and recorded messages warning people against going into public spaces without valid reasons. As of now, two drones are being used by the Police and there are plans to secure more such eyes in the sky.

Each drone can cover an area of 500 metres and can capture vehicles that are unnecessarily roaming around and spot places where there is a build-up of crowds.

“Drones are being used for monitoring purposes. There are reports of Mysureans openly defying the lockdown. The Police can’t be everywhere, so remote controlled monitoring is also needed,” Deputy Commissioner of Police (Law and Order) Dr. A.N. Prakash Gowda told Star of Mysore.

“Drones give us a bird’s eye view of who is defying the lockdown in the narrow alleys and lanes where a PCR van cannot go in. We have repeatedly appealed to citizens to stay in, but despite that, many are defying the lockdown,” he said and added that action will be taken against people based on the images of people and vehicles captured by the drones.

READ ALSO  Action against those who attack doctors, Police: DC

The two drones have been procured from private operators and the operators are taken to destinations around the city to capture images. Criminal cases will be booked against violators based on the images captured, the DCP added.

Other Police officials said that drones provide real-time intelligence to the Police command and control centre, local patrol vans and ground personnel. In the event of any major public gathering, Police vans or ground forces can be immediately dispatched to the site.

The drones also reduce response time and also optimise resource deployment in areas which are not covered by CCTV cameras and narrow by-lanes where there have been found continuous public movement, they added.

Apart from the use of technology to prevent crowd gathering, the Police force have intensified lockdown in many areas of the city to prevent the spread of virus. These measures have been taken following a directive from City Police Commissioner Dr. Chandragupta and in the wake of an increase in positive cases from contacts of a religious gathering in New Delhi.

While there is a literal curfew-like situation after 6 pm, barricades are laid across the roads where each motorist is questioned, credentials checked and then asked to proceed only if there is a valid reason. Others are directed to head back home after a stern warning.