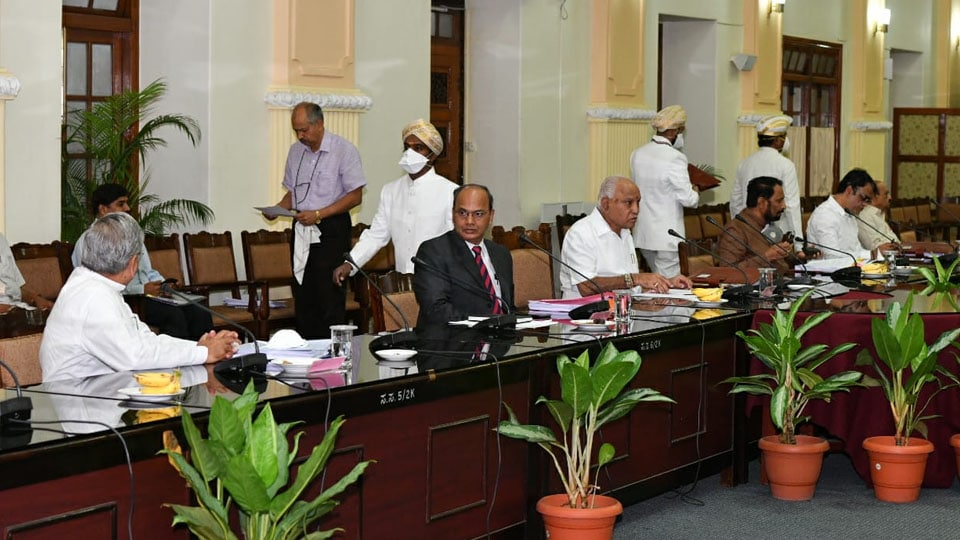 Bengaluru: The Karnataka Cabinet, in its emergency meeting held this morning,  discussed the report submitted by the Task Force led by Cardiologist Dr. Devi Shetty that has recommended continuation of lockdown measures in COVID-19 hotspots and closure of all educational institutions in State till May 31.

The report was submitted to the State Government last evening and was tabled before the Cabinet.

Chief Minister B.S. Yediyurappa elicited opinions on lockdown exit strategy from his Ministers and those Ministers who were actually on the field ­— like Medical Education Minister Dr. K. Sudhakar and Health Minister B. Sriramulu.

Latest reports from Bengaluru say that at the Cabinet meeting, all Ministers have recommended the extension of lockdown period.

Yediyurappa told reporters that the State will closely follow the directives issued by the Central Government on lockdown relaxation.

“As of now, there is a favourable opinion to extend the lockdown till April end. We will see what the Centre decides and the State will implement the same,” the CM told reporters.

The Task Force has recommended for minimising restrictions in districts where there are no cases or a few cases. It said all schools and colleges should be closed till May-end and thrust should be on online classes.

The Task Force is of the view that inter-State borders should remain closed and no buses, trains, flights or metro trains should be allowed till Apr. 30, while autorickshaws should be allowed to ply. The report said that the Government can consider allowing odd and even number registration vehicles to operate on alternate days.

The Task Force has recommended that IT-BT companies, essential Government offices and factories can function with 50 percent staff. Shops that do not have air-conditioning can be opened, the Task Force said. Inter-State rail services and flights must not start for now, the Government has been advised.

The Committee noted that rapid test kits will arrive in sufficient numbers after Apr. 12 which will help effectively ramp up testing and quarantining in the State. Local shops should be opened for longer duration to avoid crowd, said the report.

The report said that these recommendations should be in force between Apr. 15 and Apr. 30 and can later be reviewed.

However, the Task Force has underlined that social distancing should be maintained for the next six months.