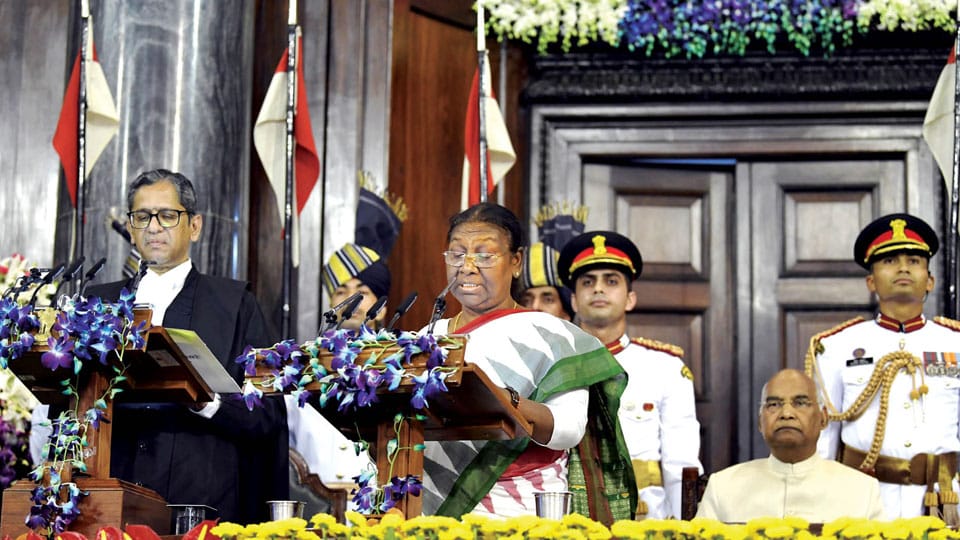 ‘My reaching this post is achievement for every poor in India’

Chief Justice of India Justice N.V. Ramana administered the oath of office to the former Jharkhand Governor, who became the first tribal and second woman President of the country.

Reaching the Presidential post is achievement of every poor in India, President Droupadi Murmu said in her first address to the nation after being sworn-in.

“Reaching the post of President is not my personal achievement, it is the achievement of every poor in India. My nomination is evidence that the poor in India can dream and also fulfill them,” she added.

“I belong to the tribal community, and I have had the  opportunity to become the President of India from a Ward Councillor. This is the greatness of India…,” she said.

Murmu said that it is a matter of great satisfaction for her that those who have been deprived for centuries, who have been away from the benefits of development, the poor, Dalits, Backwards and Adivasis are seeing their reflection in her.

Her focus will be on the rights of youths and the women of the country. “Those will be my priority from now in this position,” she said.

READ ALSO  The Showman and his Trump Card

Ahead of the Kargil Vijay Diwas on Tuesday (July 26), Murmu said the day “is a symbol of both the valour and restraint of our armed forces. I extend my greetings in advance to the forces of the country and to all the citizens of the country on this occasion. These were Murmu’s first words to her forces as she became their Supreme Commander.

Droupadi Murmu also told the nation that she started her political career when India turned 50 as an independent nation and now as it completes 75th year, she has turned President, a proud moment. She added that she’s the first President to be born in independent India.

Ahead of the swearing-in ceremony, Murmu paid homage to Mahatma Gandhi at Rajghat and offered floral tributes to the Father of Nation.

She arrived at the Parliament House from Rashtrapati Bhavan along with outgoing President Ram Nath Kovind. They were welcomed by Rajya Sabha Chairman M. Venkaiah Naidu, Lok Sabha Speaker Om Birla, CJI N.V. Ramana and others upon arrival.

Murmu exchanged the seat with the outgoing President Ram Nath Kovind and also signed the oath register placed before her by the Secretary to the President.

On the conclusion of the Ceremony in the Central Hall, the President left for Rashtrapati Bhavan where an Inter-Services Guard of Honour was accorded to her in the Forecourt and courtesies were extended to the outgoing President.