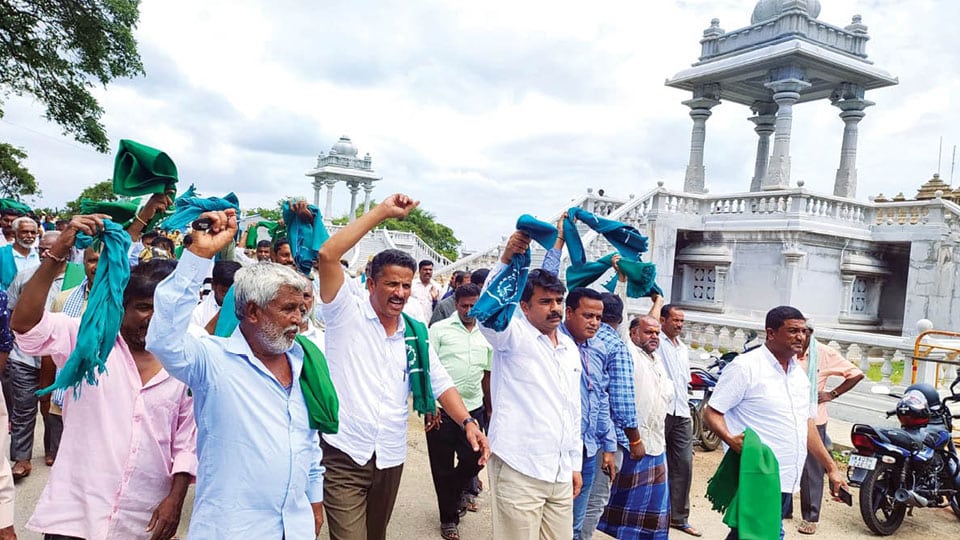 Mandya: The week-long trial blast scheduled to be conducted from today by a team of scientists from the Central Institute of Mining and Fuel Research (CSIR-CIMFR), Jharkhand, to study the impact of stone quarrying in the Krishna Raja Sagar (KRS) Dam area has met with stiff opposition by farmers who have launched a  ‘Go Back’ campaign.

Hundreds of farmers and members of Karnataka Rajya Raitha Sangha (KRRS) assembled at the main gate of the KRS Dam this morning to register their protest against the trial blast. They were demanding immediate withdrawal of the team and vowed not to allow any mining activities around 20 kilometres from the Dam. Shouting slogans, they have alleged that the blasting was an eye-wash to restart mining.

Farmers have alleged that as the elections are round the corner, the Government and mining owners (mostly political party leaders) need money to splurge in the polls. “The trial blasts are a ploy to green signal mining again,” they alleged.

The trial blasts would study the impact of blasting and deep-earth mining activities around the Dam. Mandya District Administration has permitted the team to carry out blasts and the Cauvery Neeravari Nigam Limited has paid Rs.19.25 lakh to CSIR-CIMFR.

Blasting during stone extraction results in major ground vibrations and they may also cause damage to KRS Dam. Hence, CNNL had requested Mandya District Administration to issue permits to conduct trial blasts.

As the mining areas have been completely cordoned off, it is not clear at what time the actual blasts would start. The team from Jharkhand has been put up at Brindavan Hotel in KRS.

Tight Police security has been provided in and around the Dam and also at the blast site around Baby Betta in Pandavapura and several areas of Srirangapatna.

As a prelude to the blast yesterday and a day before, the Mandya Mines and Geology Department had drilled several rocks in 10 places to make space to insert dynamite inside rocks to explode them for the tests.

On their part, farmers and social activists are arguing that the blasts should be conducted under the supervision of the Union Ministry of Environment, Forest and Climate Change.

“The Karnataka State Natural Disaster Monitoring Centre (KSNDMC) has already recommended a ban on mining activities around KRS Dam and now what is the need of another Government agency to conduct trial blasts,” they asked.

They have alleged that the District Administration has succumbed to the pressure from mining barons and given permission for the trial blasts.

Trial blasts, without precautionary measures, will affect the Dam. “We will not allow the team to conduct the trial blast,” they said.