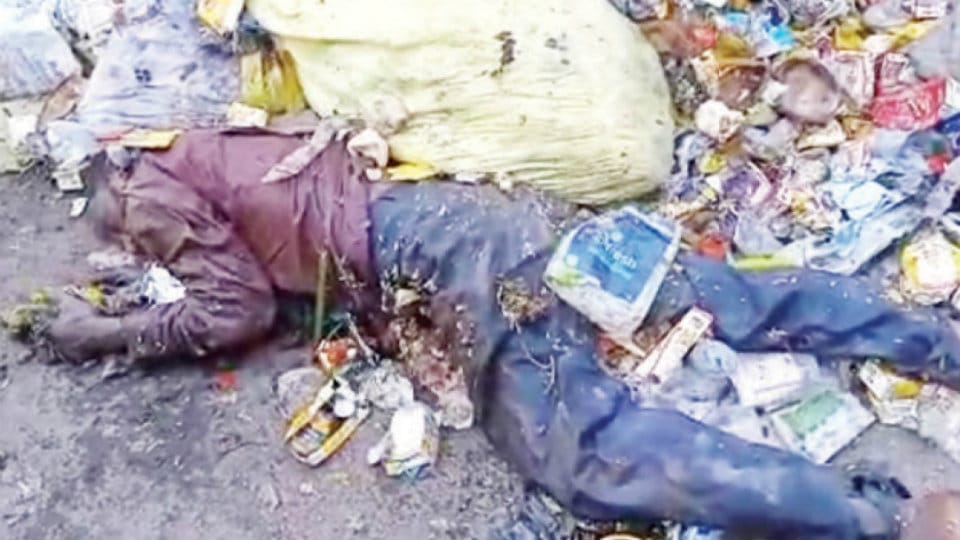 Mysuru: A man was found trapped in a heap of stinking garbage on Tuesday morning by the Pourakarmikas of Mysuru City Corporation.

The Pourakarmikas, meandering around the city collecting the garbage dumpsters and emptying them into tippers, spotted the man amidst the rubbish. If he was not spotted on time, the garbage truck’s hydraulic compactor, which is used to crush rubbish, was likely to crush his body.  Despite the trauma, the man was responsive when the workers found him.

Actually, the man was in an inebriated condition and after consuming alcohol to his heart’s content, the man climbed the dumpster to sleep. He had not realised that he was actually getting into a dumpster placed behind RMC Market. Promptly, the residents and merchants of surrounding localities dumped garbage inside the dumpster as usually they do.

Probably due to his inebriated condition, the man did not sense the smell of muck and dirt around him. Or the morning cold made him squeeze between garbage bags.  When MCC Pourakarmikas came in a tipper lorry to collect garbage, one of them saw a leg sticking out of the overflowing roadside container.

He immediately alerted the other workers. The workers then pulled him out of the garbage pile. Examining him, the workers realised that he was alive and was drunk. They sprinkled water on his face and the man suddenly became active. “I am fine and there is nothing wrong with me,” he blabbered.

Garbage collected from the RMC Yard is transported to a compost plant at the solid waste management unit in Vidyaranyapuram. If the Pourakarmikas had not noticed him, he would have been dumped in the garbage processing machine that would have crushed the man’s body.

“He is lucky that we noticed him or else he would have died,” said a Pourakarmika. The Pourakarmikas then took the drunken man to K.R. Hospital and was allowed to go after a medical check-up. Doctors certified that he was healthy and bore no injuries on his body.