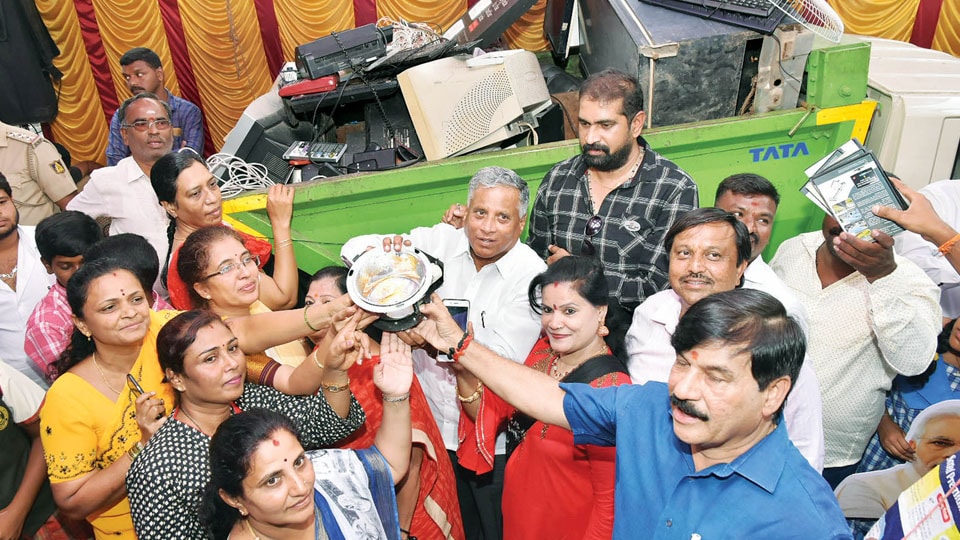 Speaking at the inauguration, MLA S.A. Ramdas, who is spearheading the campaign, said Pourakarmikas would collect e-wastes on 17th of every month and dump the same at the premises of all nine MCC Zonal Offices. Later, the collected e-waste would be auctioned and sold and the funds generated from the auction would be used for ‘Green-Mysuru’ initiative. Ramdas also said that various organisations in the city would be coming together on Oct. 17 to launch a drive against use of plastic in Mysuru.

The special guest for the event, Tejaswini Ananth Kumar, wife of late Union Minister Ananth Kumar and Managing Trustee of Adamya Chethana, Bengaluru, said it is not enough to just collect e-waste from homes but what matters is its disposal and she hoped MCC would help in this matter.

She also mentioned that on Sept. 22, they would be celebrating late Union Minister’s 60th birth anniversary and called upon people to adopt the concept of ‘Zero Waste Kitchen’ launched by Adamya Chethana in 2011, where the waste generated from kitchen could be used for producing biogas and manure.

Tejaswini elicited laughter from the audience when she recalled how her late husband used to joke with PM Modi saying, “Three great personalities have been born in the month of September: Jan Sangh leader Deendayal Upadhyaya, PM Modi and Ananth Kumar.” This made the PM smile, she added.