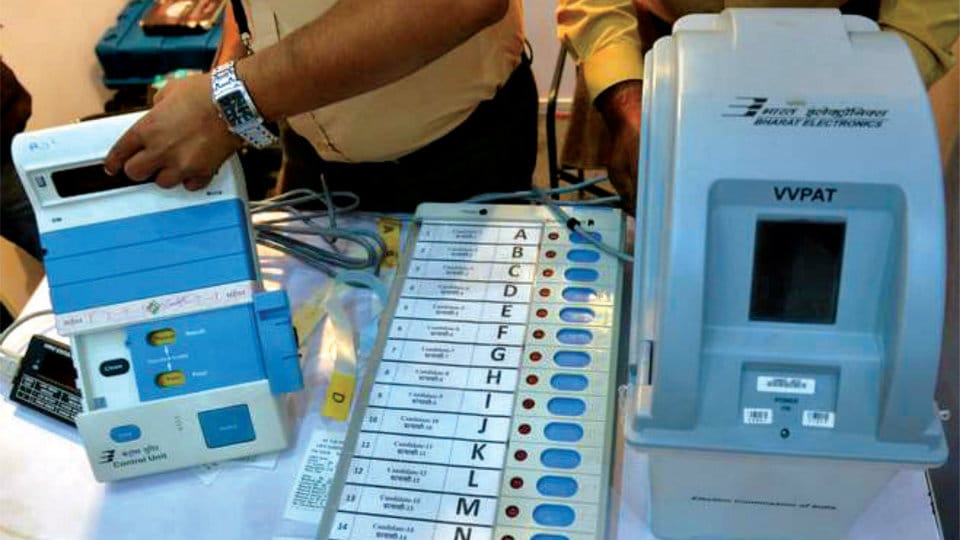 Bengaluru: The demand of the ruling Congress Government in Karnataka for replacing Electronic Voting Machines (EVMs) with ballot papers is unlikely to cut much ice with the Election Commission (EC) as the poll body has already initiated the process to introduce EVMs equipped with Voter Verifiable Paper Audit Trail (VVPAT) for the forthcoming Assembly elections in 2018.

Karnataka will be the first State in South India to go to the polls with EVMs linked to VVPAT. Karnataka’s Chief Electoral Officer Sanjiv Kumar said they have been preparing to use EVMS attached with VVPAT in all 54,261 polling booths of the 224 Assembly constituencies to make the process more transparent.

EVMs linked with VVPAT were introduced for the first time in the recent Gujarat and Himachal Pradesh Assembly elections after the Congress and other parties raised doubts about EVMs. In Karnataka, VVPAT was first successfully tested in the Nanjangud and Gundlupet by-polls last year. The move is significant in the backdrop of Congress and JD(S) alleging that EVMs can be tampered with.

VVPAT unit is a printer-like machine attached to EVMs and it allows voters to verify that their vote has been cast correctly. Once a voter presses the button of his choice in the EVM, a printed paper appears with the name of the candidate and the poll symbol so that the voter can verify it for about 6 seconds.

After the voter views the receipt, it goes inside a container linked to the EVM, which can be accessed only by the polling officers.

These printed slips can be accessed and verified by the polling officers in case the EVM develops a snag during the counting process. The printed material that are secured in a box can also be used to verify if there is any rigging or electoral malpractice.

The printout is then deposited in a box and can be used to resolve any dispute regarding the election.  Bharat Electronics Limited (BEL) and Electronics Corporation of India Limited have built the VVPAT system.

The voter data obtained from the VVPAT machines can be stored for over 5 years and the Election Commission will spend Rs. 500 crore to enable over 4.8 crore voters to exercise their franchise. Karnataka has a population of over 6.8 crore. The final voter list will be published on Feb. 15, 2018.

Assuring that the website ceokarnataka.nic.in will be made bilingual (English and Kannada) for the convenience of electorates, he said that voters can find out whether their names are there in the draft electoral rolls on the website.

The State Election Commission has formally set the stage for the Assembly polls by announcing the Draft Electoral Rolls (DER) of all the 224 Vidhana Sabha constituencies.

The tenure of the present Karnataka Assembly ends on May 28, 2018.

After a voter presses the button on the EVM against the chosen candidate, the Voter Verifiable Paper Audit Trail  (VVPAT) prints a slip containing the name of the candidate and the election symbol and drops it automatically into a sealed box .

The machine gives voter a chance to verify the vote. It is placed in a glass case so that only the voter can see it.

The slip is displayed to the voter for six seconds after which the VVPAT machine cuts it and drops it into a storage box with a beep.

The machines can be accessed by polling officials. This helps verify the vote goes to the correct candidate.