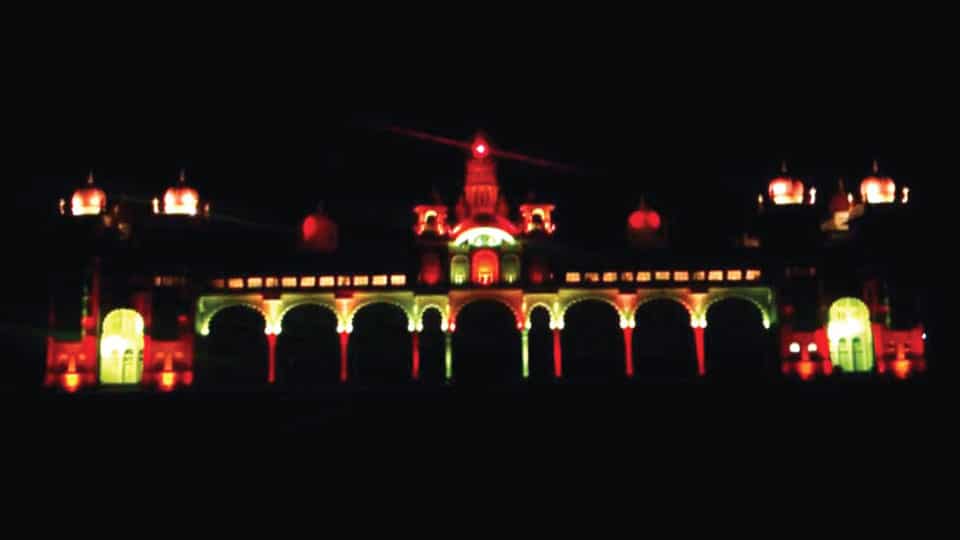 English Sound and Light Show at Mysore Palace from Jan. 2018

Mysuru: The Sound and Light Show (Son et Lumiere) of the six-hundred-year history of Wadiyar dynasty in English will unfold in the first week of January 2018 at the Mysore Palace. The Hindi version will also be shown shortly.

The Mysore Palace Board and the District Administration is already showing the city’s cultural history in Kannada since the last six years to the tourists. However, many tourists have to watch the spectacular show without understanding it, as it is in Kannada.

Now to set this right, the English and Hindi versions of the Show will also be displayed. “The English version is ready and once the Mysuru Winter Festival is over, there will be a trial run in the first week of January and once the approval is given, it will be shown to the public,” said Mysore Palace Board Deputy Director T.S. Subramanya, speaking to Star of Mysore.

“The Sound and Light Show begins with the legend of Goddess Chamundeshwari vanquishing Mahishasura. Then the history of the Waidyars from 1399 to 1947 is told in a very beautiful way. It also shows the culture and tradition of the city, social revolutions and Mysuru-branded products,” he said.

“As the Show is in Kannada right now, the visitors are not many. But this does not deter the foreigners from coming and witnessing the spectacular show. Many of them do not understand the language, but they like to soak in the atmosphere,” he added.

In the Kannada version of the Sound and Light Show, actors Ramesh Arvind, Dattanna, Jayanthi, Sharat Lohitashwa, Mico Manju, C.R. Simha have lent their voices. In the English version, 35 people with theatre background of the likes of artistes Mallika Prasad, Prakash Belavadi, Nandagopal, late C.R. Simha have lent their voices. Simha’s voice was recorded before his passing away.

The Show in Kannada has been taken up by Innovative Lighting Company and the same one will also screen the English and Hindi versions. Using the Japanese technology, they have created magical effects and the quality is going to improve.

“As the Palace lights are switched off and the sound and light action begins, one is transported into a completely different world,” Subramanya said.

Asked whether the Show can be improved, he said, “We can definitely upgrade it in the English and Hindi versions. However, there are lot of constraints and hence we decided to stick to the original version.”

“The Palace Board has planned to have two shows one in Kannada and another in English or in the beginning we will show each language on alternate days and on Sundays and Holidays may be we will have both the shows, one from 6.45 pm to 7.30 pm and another from 7.45 pm to 8.30 pm. When the Hindi version comes, then we will mix Hindi and English version on alternate days but show Kannada version on all the days,” said Subramanya.

The English version of the Son et Lumiere is ready and once the Mysuru Winter Festival is over, there will be a trial run in the first week of January and once the approval is given, it will be shown to the public.” — T.S. Subramanya, Palace Board Deputy Director