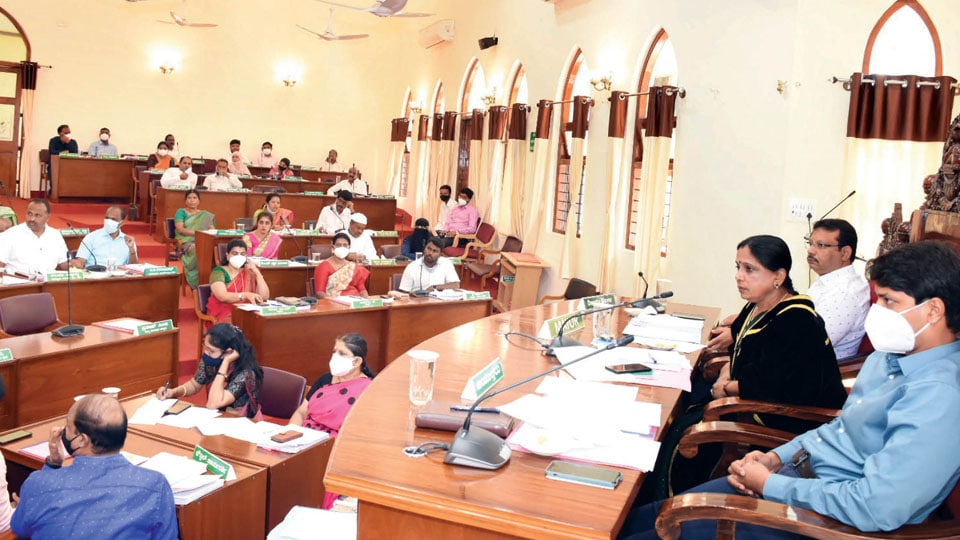 Mysore/Mysuru: The controversy over the erection of statues of two eminent personalities at Mathrumandali Circle that compelled the Mysuru City Corporation (MCC) to demolish the entire Circle reverberated at the MCC Council meeting this morning where women Corporators alleged Police high-handedness.

The MCC Development Officer, also a woman, came under fire for not recognising a woman Corporator when the latter was being arrested by the Police. The Council meeting that was convened on Jan. 6 and Jan. 11 were deferred for today due to unavoidable circumstances and the meeting was held at Nalwadi Krishnaraja Wadiyar Hall.

As soon as the meeting began, Ashokapuram Corporator Begum Pallavi raised the issue of her arrest when the MCC and Police demolished Mathrumandali Circle in the last week of December. The structure was razed by earth movers amidst stiff protests by local residents.

Begum Pallavi alleged that though she was an elected representative, she was dragged by Police and MCC Development Officer Chandramma failed to recognise her and as a result, the Police had made the arrest.

“The Development Officer did not tell the Police that I was a Corporator and even my repeated requests fell on deaf ears. The Officer was a mute spectator as I was bundled into a Police van and this is an insult to all lady Corporators,” she alleged.

The demolition was necessitated as one group wanted to erect the statue of Dr. B.R. Ambedkar, another wanted the statue of Rashtrakavi Kuvempu. As both groups were strong and vociferous, conciliatory efforts by the MCC did not yield any result. When convincing tactics failed, the Corporation resorted to demolishing the Circle.

Begum Pallavi was joined by Ashwini Sharath and Shobha Sunil who also termed the arrest as an insult to women Corporators. Ruckus prevailed in the Council as Pallavi narrated how she was dragged by over 10 women Police Constables.

Intervening in the discussion, MCC Commissioner G. Lakshmikantha Reddy said that the Police would not have known the Corporator and this might be an inadvertent error. “Publicly humiliating a Corporator is like an insult to the MCC and the Police might have erred. The MCC was forced to demolish the Circle as the two warring groups were not ready for a compromise. We did it to prevent a law and order situation,” he said.

Mayor Sunanda Palanethra pacified the agitated women Corporators and said the Development Officer was down with COVID and a Committee would be formed to look into the issue.  The Council later debated on stray dog and pig menace inside the city. The meeting was still on when we went to press.