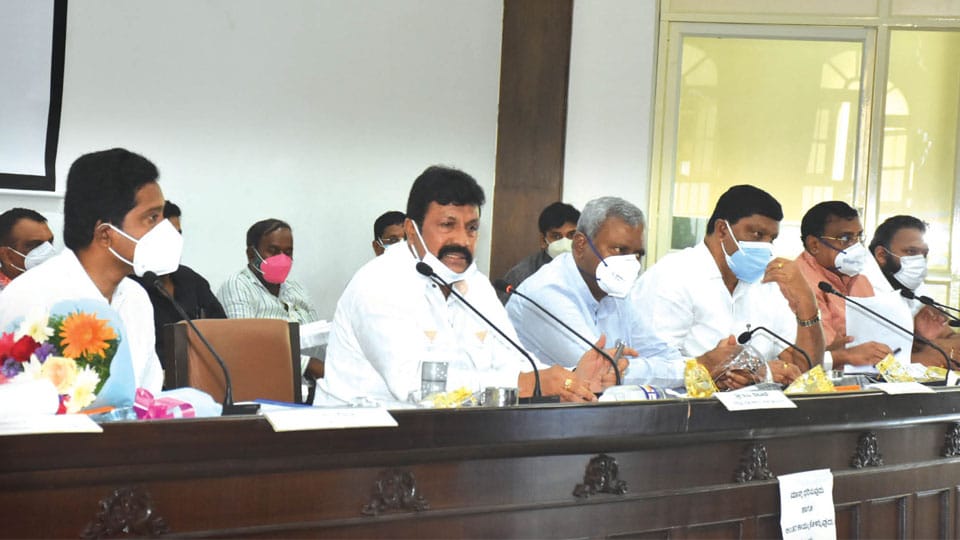 Mysore/Mysuru: With the monsoon having set in, Agriculture Minister B.C. Patil held a review meeting on the  district’s preparedness for kharif season, at the Zilla Panchayat (ZP) Hall here yesterday.

Soon as the meeting began, the Minister sought inputs on stocks of agricultural inputs such as seeds, fertilisers etc., from the Department officials and questioned them on reports that the district was facing shortage of sowing seeds.

After providing statistics on agricultural input stocks in the district to the Minister, Joint Director of Agriculture Dr. M. Mahanteshappa refuted the reports and said that the district has sufficient stocks of all agricultural inputs and the farmers need not worry. He explained the Minister on the steps being taken to block any black marketing of seeds, fertilisers etc.

Dr. Mahanteshappa further said that 566 fertiliser shops in the district were inspected and four of them have been ordered to shut down for illegalities.

Later addressing the meeting, Patil said that the Government was always pro-farmer and there is a need for more publicity among farmers regarding agricultural subsidies and other benefits.

Maintaining that the State Government was giving 100 percent subsidy for DAP fertiliser and Rs. 1,000 subsidy for urea, the Minister warned agricultural dealers against selling any agricultural inputs above MRP. Asking the officials to ensure that there is no artificial shortage of any  farm inputs, he cautioned that those found hoarding and profiteering, will be booked under appropriate sections of the law.

Patil also warned the officials against any apathy and laxity in their work, with the district needed to be more alert and active with the advent of monsoon rains.

Speaking to press persons after the meeting, Patil said that Mysuru district recorded deficit rainfall of 16 percent in the one-month period from May 15 to June 15, while there was excess rainfall in most of other parts of the State.

Asserting that Karnataka achieved a record food production of 153.08 lakh tonnes in the current year despite several constraints and the COVID crisis, Patil said that Mysuru district was leading in sowing of seeds by recording 49 percent as compared to 13 percent on an average in other districts. He contended that Mysuru district has 727.5 quintals of seeds stock in Raitha Samparka Kendras.

In respect of fertilisers, the Minister said that Mysuru district has 17,749 MT which is sufficient to meet the current demands.

Patil also maintained that Karnataka was the top State in the country for crop survey through the designated App.