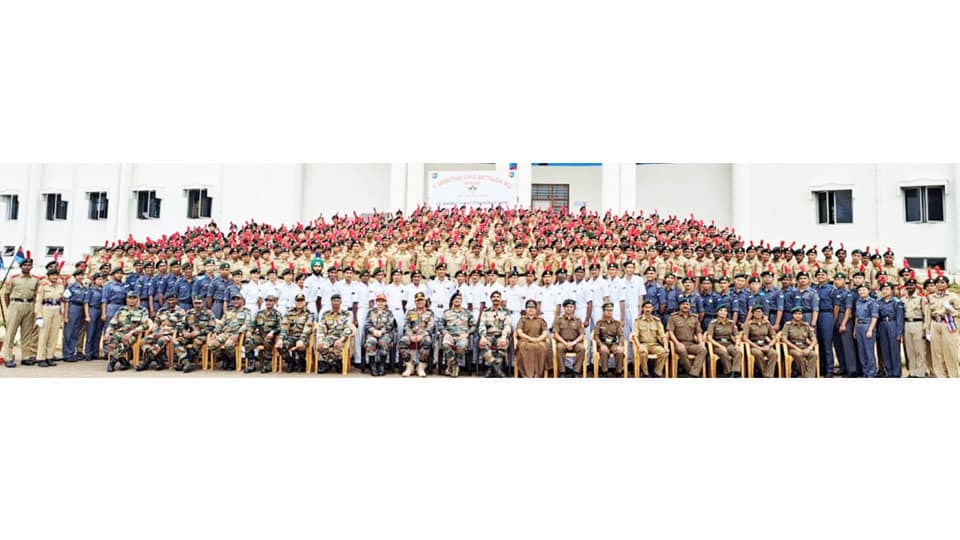 Camp activities got off to a start with opening address by Colonel R.R. Menon, NCC Group Commander, Mysore Group NCC.

During the 12-day camp various activities including ‘Mysuru Darshan’ for the cadets will be organised. A total of 600 cadets are participating in this camp which includes150 cadets from North East Region (NER),18 Cadets from Goa and 432 cadets from Karnataka.

In the EBSB Camp, besides Military Training, cadets are made to know and understand the culture and traditions of                  other regions and States. It is done through inter-personnel interaction and power-point presentation. Cadets are basically made to acquaint with festivals, food, traditional attire, dance, cultural heritages, tourist and historical places etc.

Other skill development programmes are also undertaken. Ex-NCC cadets (EXPA Organisation) is conducting a well- structured Skill Development Programme for the cadets for two complete days. A team of 10 instructors from various parts of the country will conduct this training. Besides this, Painting, Debate, Sports competitions and a cultural programme will also be organised. All winners and deserving cadets will be given a certificate and prize.

In his opening address, Colonel R.R. Menon gave emphasis on learning, discipline and character building. He motivated and encouraged the cadets and asked them to imbibe good character and to become a better and a disciplined citizen — thus they can contribute towards ‘Nation Building.’