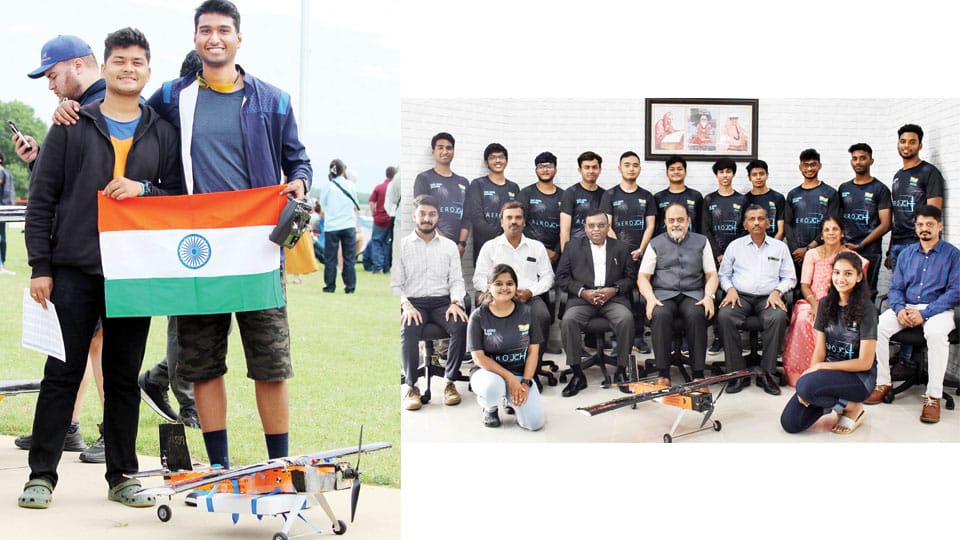 Mysore/Mysuru: Team AeroJC, the Aero-modelling Club of SJCE, JSS Science and Technology University, Mysuru, represented India and the University in the Micro-class category at the recently held SAE Aero Design competition in Fort Worth, Texas, USA.

The competition requires its participants to apply the Principles of Aerodynamics and Engineering Sciences to Practical problems via technical constraints levied by them.

Contestants create and test radio-controlled aircraft that take off and land safely while also transporting a huge amount of cargo.

Teams are judged based on a number of criteria which include the payload percentage, the highest payload hoisted, the oral presentation and the design report.  At SAE Aero Design Competition in TX, USA, two fourth-year mechanical students from AeroJC, Satwik Mishra (Team Captain) and Shawaiz Akhter (Avionics Captain), along with faculty Dr. S. Gayathri from Electronics and Communication Department, represented the Club.

They worked with leading engineering minds from Lockheed Martin, Boeing, Solidworks, etc., during the competition and also competed with Universities like Georgia Tech, Texas A&M, Warsaw University to name a few.

A team of 10 engineering students and two faculty advisors, Prof. Y.C. Arun and Prof. M.S. Abhinandan, were initially selected to represent the club in Texas. However, due to some unforeseen circumstances, only a team of three visited the US.

READ ALSO  'Run for Fitness' and 'Road Race for Health'

The team works throughout the year for this competition ensuring that no stones are left unturned which has helped them better their performance each year. The team is looking forward to the 2023 competition and has begun preparations for it with inputs from the previous year.

The team has expressed its gratitude to Faculty Advisors Prof. Arun and Prof. Abhinandan, who ensure smooth operation of the club; JSS STU Management, Student Alumni and fellow Students for their unwavering support, encouragement and sponsorship.