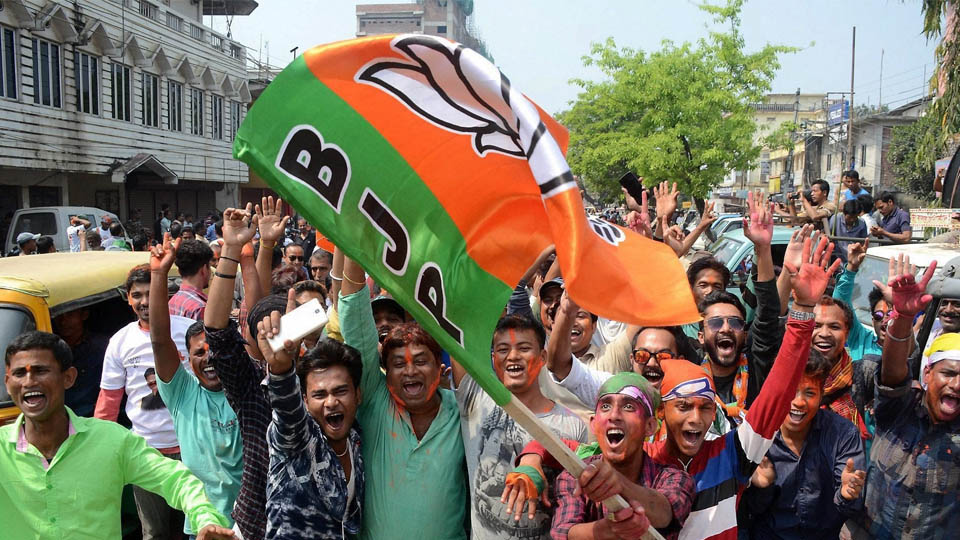 It’s miracle time in India. A tree with no roots and no leaves, nevertheless bears fruit in Tripura; the BJP, with a previous record of 0, wins 35 of 59 seats. The bigger miracle is that it does not matter who wins, it’s the BJP that will form the Government. In Meghalaya, it won only 2 seats against the Congress’ 21. In Nagaland, it won only 11 seats against the NDF’s 29. But in both States the BJP took over, as it did in Goa a year ago with only 13 seats in a house of 40. At this rate, don’t be surprised if Siddharamaiah leads the Congress to victory in Karnataka and Yeddyurappa forms a BJP Government. Sweet are the uses of power at the Centre.

It will be a mistake however, to attribute BJP victories to political and money power alone. It has strategists who are not second to Kautilya and are adept at forging cynical alliances. The sharpness with which the likes of Ram Madhav, Sunil Deodhar and Himanta Biswa Sarma used these skills is unmatched in the history of elections. There are only a half dozen such brains in the BJP, but that is a half dozen more than other parties have.

The pity is that their intellectual vigour goes hand in hand with party apparatchiks’ addiction to the vulgarity of hatreds. The Tripura triumph was followed by violence of a kind that turned triumph into shame. Mobs attacked not just CPM offices, but also colleges, houses, villages, markets and areas considered Leftist. The wrecking of Lenin statues led to an avalanche of chain reactions with statues of Periyar, Syama Prasad Mukherjee, Ambedkar and even Gandhi getting vandalised. The world must be laughing at our “democracy.”

The mentality that condones criminality in the name of patriotism is dangerous. H. Raja symbolised this. This BJP leader in Chennai is good at discrediting the BJP with asinine comments. True to form, he said that the fate that overtook the Lenin statues must now overtake Periyar statues in the South. In that one stroke, the BJP lost whatever ground it gained by taming the AIADMK. For Periyar, with all his weaknesses, was a visionary who enthroned rationalism in public life, gave meaning to Dravidian ethos and put self-respect above Brahmin hegemony. Even his critics respect Periyar. Raja will not understand the nuances of such things. Small minds with big mouths never do.

Note also that neither the statue desecration spree nor the Tripura violence stopped after the Prime Minister’s “strong” criticism of them. Like lynchings in UP and Gujarat, BJP’s communal extremism has a momentum of its own, beyond the control of even the Prime Minister. For that reason, the northeast is going to be restive and violence-prone in the days ahead.

In Meghalaya, for example, Chief Minister Conrad Sangma plans to lead a “secular” Government with BJP’s collaboration when the BJP does not accept even the word secularism; it only recognises “pseudo- secularism.” Conrad is in for surprises.

And in Nagaland? Remember BJP leader Kiren Rijiju attacking his Cabinet colleague Mukhtar Abbas Naqvi over the right to eat beef? During the campaign the BJP uttered not a word about Nagaland’s food habits or religion. But campaigning BJP and power-wielding BJP are separate entities. It is a certainty that there will be ghar wapasi efforts now in the beef-eating Christian-majority State. How will this affect a State already in the grip of insurgency and armed political groupings?

Continuing minority bashing shows that the BJP takes it as normal under its rule. Just last week Roshanbiwi in Gujarat’s Gandhinagar district had her thumb, index finger and middle finger chopped off by Bhajrang Dal rowdies.

Reason: She had disobeyed the gang’s order to remain indoors when they were celebrating the anniversary of Babri Masjid demolition.

The late Christopher Hitchens, disgusted by the Iranian fatwa-givers’ hunt of his friend Salman Rushdie, summed up the malady of intolerance in two words: “Religion Kills.” The Ayatollah’s call for murder was at least a religious edict based on religious beliefs. In India, it isn’t even that. It is merely the misuse of religion for selfish political gains. It is not Hinduism at all. It is a convoluted version called Hindutva.

So what are our tomorrows going to be? Will we have to say with King Lear: “We have seen the best of our time: machinations, hollowness, treachery and all ruinous disorder, follow us disquietly to our graves.” Or, will this too pass and sanatana dharma survive unscathed?

3 COMMENTS ON THIS POST To “Elections are now miracles”