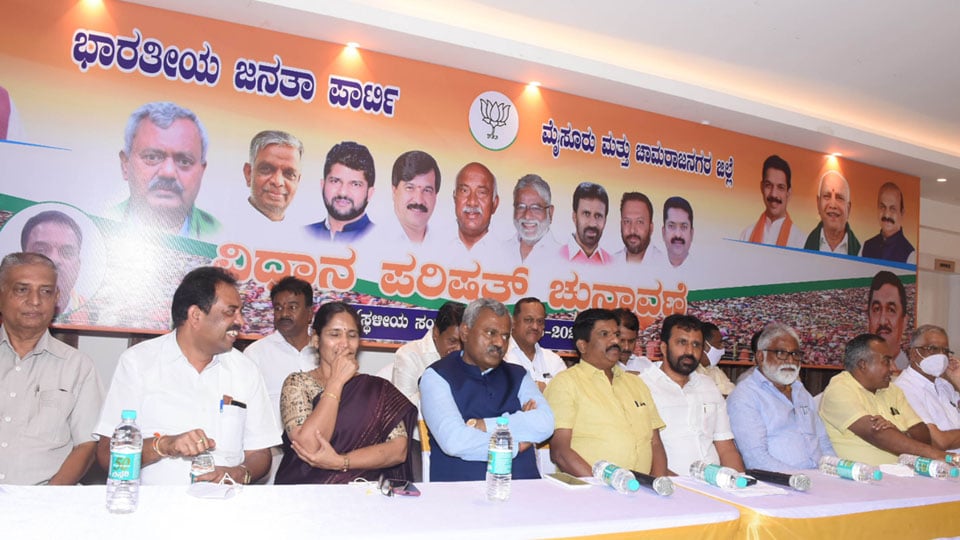 Addressing party workers from Mysuru and Chamarajanagar districts at a private hotel here yesterday, Somashekar maintained that Raghu Kautilya stands a good chance of winning this time and as such, the party workers should leave no stone unturned to ensure his victory.

Noting that Raghu lost the last polls by a slender margin, the District Minister asked the party workers to campaign hard in all the 15 Assembly segments of the two districts.

Pointing out that he too will galvansie the party workers for ensuring the win of Raghu Kautilya, Somashekar expressed confidence of a huge win for the party candidate. Maintaining that he has sought support from MLC Sandesh Nagaraj, he said that the MLC has assured his support for the BJP candidate. The party candidate Raghu Kautilya, in his address, stressed on the need for the party workers to educate the voters most of whom are Gram Panchayat members. Calling upon the party workers for an organised and united effort in the remaining days  for ensuring his victory, he observed that lack of co-ordination had resulted in his defeat in the last polls.

Highlighting his work as D. Devaraj Urs Backward Classes Development Corporation Chairman in the past 18 months, Raghu maintained that he has been receiving good supports from all parts of the two districts. He also asked the party workers to submit a report to the District Minister and the party’s Poll In-charge on the possible number of votes that he (Raghu) would get in every Assembly segment of the two districts.

Kollegal MLA N. Mahesh, in his address, said that with the BJP in power at both the Centre and the State, he hoped that the party candidate Raghu Kautilya will have a smooth sailing in the Council polls. Emphasising on the need for a concerted and co-ordinated campaign in all Local Bodies, he suggested the party workers to sensitise the voters on the need for electing the BJP candidate in the MLC polls. Raghu’s victory will further strengthen the party in the region, he added.