Home » News » Every house in city to have water meter 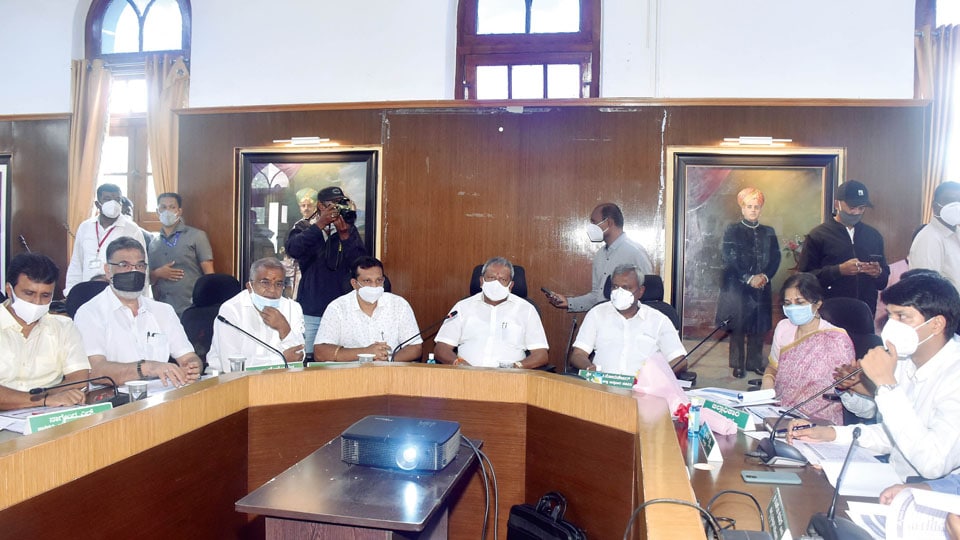 Every house in city to have water meter

Mysore/Mysuru: Local bodies including the Mysuru City Corporation (MCC) are well-known for their poor revenue mobilisation efforts. Tax loopholes, pilferages of water are aplenty often leading to a frequent rise in taxes, burdening the honest and allowing the dishonest to escape from paying any tax.

According to statistics provided by Vani Vilas Water Works (VVWW), the water supplying arm of the MCC, over 20 percent of consumers have illegal connections and a major percentage of the meters are not working. A few houses and commercial establishments owe more than Rs. 120 crore water bills and only 70 percent pay water bills regularly.

The issue cropped up during a progress review meeting of the MCC held yesterday under the chairmanship of Urban Development Minister Byrathi Basavaraj and Mysuru District Minister S.T. Somashekar where Basavaraj directed officials to install water meters to every house to prevent pilferage and also launch special drives to regularise illegal connections.

Connections of those who have not paid dues must be disconnected and a vigilance squad has to be set up to keep check on corrupt practices, the Minister directed.

Noting that the work on LED bulbs for street lights is a non-starter, Byrathi Basavaraj said that in the coming days, Mysuru would get 60,000 LED bulbs and the work order would be issued soon.

The present Government-constituted Heritage Committee has over 25 to 30 members and the Committee would be dissolved to constitute a fresh Committee. “A decision would be made regarding several heritage buildings in Mysuru as brought to my notice by the MLAs and there is a need to reconstitute the Heritage Committee which will be taken up in the coming days,” he said.

Chamundeshwari MLA G.T. Devegowda urged the Minister to come up with a comprehensive Underground Drainage (UGD) system for the new Layouts approved by Mysuru Urban Development Authority (MUDA) that had come up outside the Outer Ring Road.

He drew the Minister’s attention to the pathetic condition of the UGD in the smaller Layouts. The MLA said that there were many Layouts extending to one, two and three acres of land and they do not have large septic tanks as their capacity is limited to 100 to 200 people. As such UGD water overflows at  many places.

He urged the Minister to ensure that four treatment plants were set up in four different directions of the city so that the UGD water from the residential Layouts and the villages outside the Ring Road in Mysuru is treated.

Responding to the MLA’s request, Basavaraj said that several Layouts formed by MUDA were in the process of being taken over by the MCC. These Layouts would be developed with a one-time settlement of Rs. 377 crore and would be handed over to the MCC. Accordingly, the MUDA has initiated works worth Rs.98 crore that included roads, UGD and parks, he said.