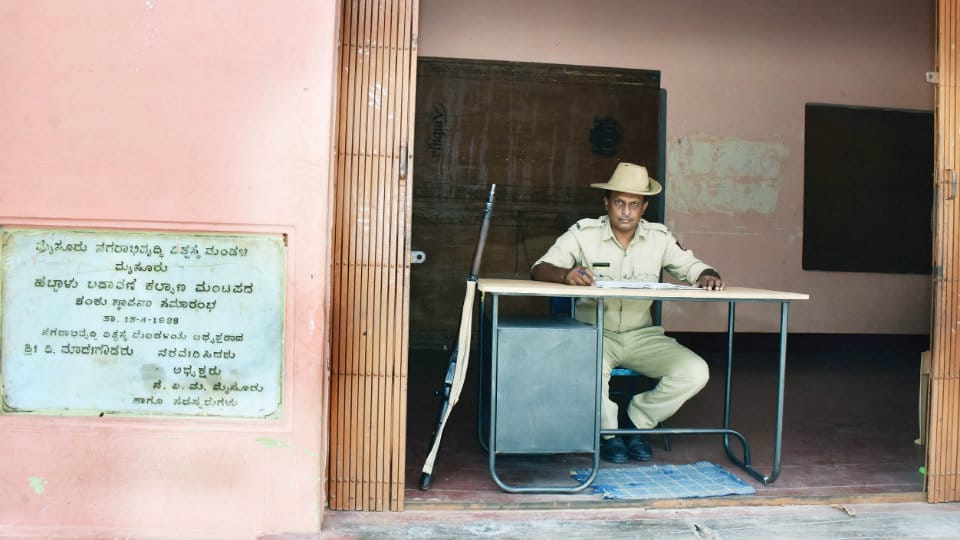 We need the Choultry back, demand miffed residents

Mysuru: The residents of Hebbal are a miffed lot as the CITB Choultry, the only place where they conduct their family events and ceremonies, has been sealed by Election Officers. Reason: The building is being used as a Strong Room to store Electronic Voting Machines (EVMs) that were used in the elections held for Mysuru City Corporation in August-September 2018.

Residents are demanding authorities to remove EVMs that are gathering dust inside the Choultry. They said that the CITB (City Improvement Trust Board) Choultry was built in 1988 and is open for public events at a nominal price of Rs. 12,000 per day while other choultries charge exorbitant rates.

“Now the whole purpose of the Choultry is defeated as it is locked 24/7 and anyone who enters the premises is shooed away by the security personnel,” said Vasantha, a resident of Hebbal. He added that a majority of middle and lower middle class families are robbed of a convenient and affordable opportunity to conduct their family ceremonies as the Choultry is out of bounds for public.

The elections for all the 65 Wards of the MCC were held on Aug. 31, 2018 as per the Karnataka Municipal Corporation (Election) rules and regulations. A total of 1,064 Control Units and 1,064 Ballot Units were used and the results were declared on Sept. 3.

As per the guidelines issued by the Election Commission of India, Ballot Units (EVMs) and Control Units must be stored at a secure place — Strong Rooms — for 6 months in case of any objections raised by contesting candidates and the votes might have to be recounted. After 6 months, the machines can be shifted to other location, preferably a government building so that the public is not inconvenienced.

But here, even after one year the machines continue to be locked inside the CITB Choultry and all the doors and windows have been sealed with plywood sheets as per the Election Commission norms. The machines are kept inside the main hall and it is sealed. Round-the-clock security is provided by City Armed Reserve Police.

The security personnel work in three shifts and guard the Strong Room. Hebbal Police Inspector has the responsibility of visiting the Strong Room frequently to ensure everything is in order. As per procedure, after the elections and the 6-month period, the machines should have been shifted to a government building that is in MCC custody and the CITB Choultry should have been handed over to Choultry’s custodian Mysuru Urban Development Authority (MUDA).

In May this year, people of the area complained to MUDA and urged it to open the facility for public events as the mandatory 6-month period is over. Following this, MUDA wrote a letter to the MCC asking it to move the machines from the Choultry. But nothing has happened so far, angering the residents. According to sources, MUDA had temporarily handed over the Choultry to the MCC on Sept. 3 last year and MUDA had fixed a monthly rent of Rs. 84,000.