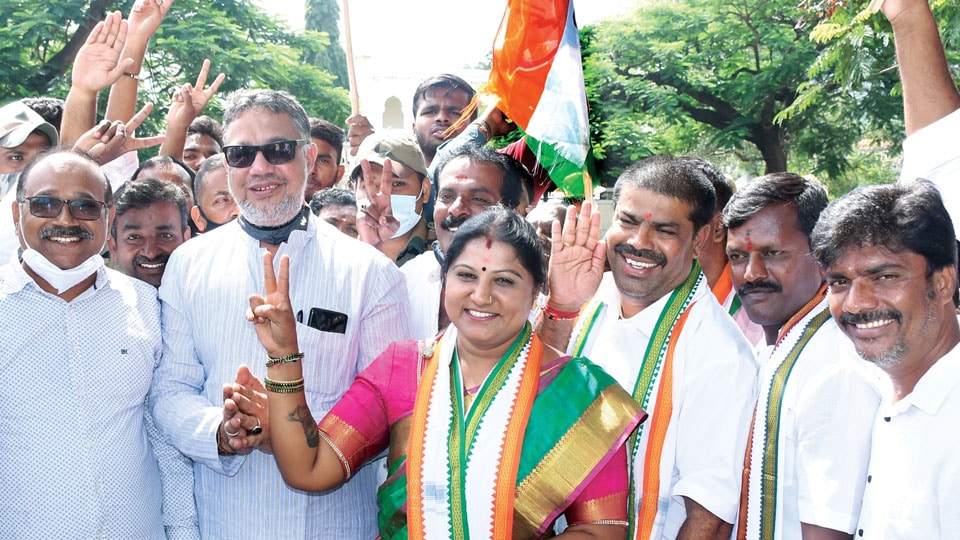 Mysore/Mysuru: In a big jolt to the ruling BJP, which had celebrated its first ever Mayoral poll victory just a few days ago, the Opposition  Congress won the by-poll to MCC Ward 36 (Yaraganahalli and Ambedkar Colony) recording an emphatic victory by a margin of nearly 2,000 votes this morning. The Ward was reserved for Backward Class Category-B (Woman).

The by-election held on Sept.3 was necessitated after the High Court annulled the election of Rukmini Madegowda of the JD(S)  in May last, on charges of inappropriate declaration of her assets in the 2018 MCC polls.

The Ward had recorded a poll percentage of 64.49, with 6,896  out of 10,693 eligible voters exercising their franchise in the by-poll held on Sept.3. The Ward had witnessed a triangular contest with only candidates from BJP, Congress and JD(S) in fray.

Counting of votes was taken up this morning at Maharaja Sanskrit Pathashala on Sayyaji Rao Road close to MCC Main Office under tight security. The counting process began from 8 am under the supervision of Returning Officer M. Karthik and Assistant Returning Officer  M. Prasad with all Government SOPs  on COVID precautionary measures in place.

The counting  was divided into 11 rounds and Congress candidate Rajani Annaiah consolidated  her lead after every round of counting, surging well ahead of her rivals S. Leelavathi of the JD(S) and P. Shobha Ramesh of the BJP in all the rounds.

After the counting ended at 9.30 am, Rajani Annaiah of the Congress, who bagged 4,113 votes was declared the winner. Rajani’s main rival Leelavathi of the JD(S) managed to secure only 2,116 votes while Shobha of the BJP fared poorly getting just 601 votes.

Shobha, who suffered a humiliating defeat, also lost her security deposit. The BJP’s surprisingly  poor performance comes just 12 days after Sunanda Palanetra was elected as the first ever BJP Mayor of Mysuru on Aug.25.

Rajani (Congress) had lost to Rukmini (JD-S)  in 2018 MCC polls by a margin of 300 votes and today’s resounding victory was a sweet comeback for her.

Speaking to presspersons after her huge victory, Rajani credited her victory to the hard work done by her during her earlier tenure as Ward Corporator and the relentless campaign by Congress leaders and party workers.

Recalling her developmental works in the Ward earlier, she said that she will continue with the works and also address the grievances of people.

With Rajani’s victory, the Congress strength in the 65-member MCC has risen to 20 while the JD(S) tally has dropped to 16 Corporators  from the earlier 17, the BJP has 23 and Independents 6.