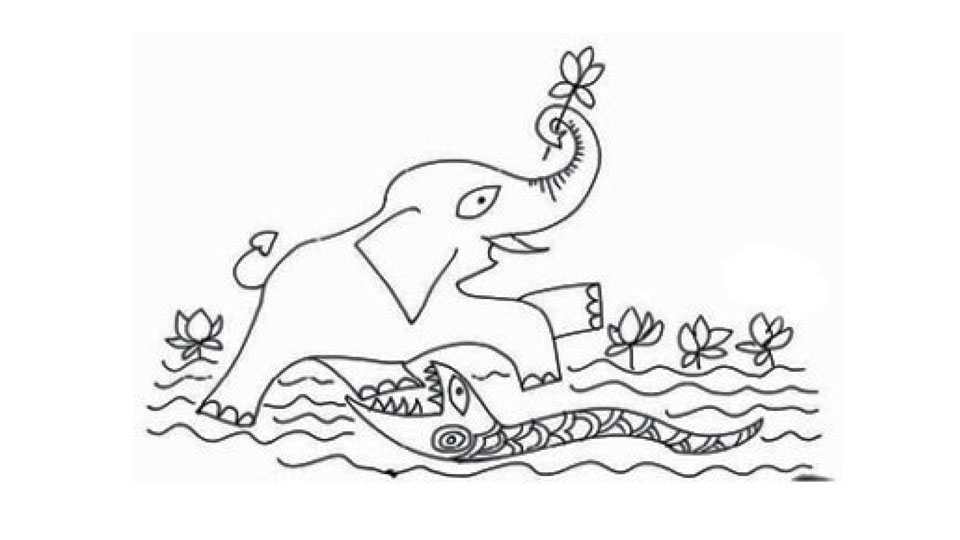 The story of Gajendra Moksha from the Bhagavata Purana speaks of an elephant king, Gajendra, who is in a state of erotica arousal, and is having fun with his herd of cow elephants in a lotus lake in a heady erotic atmosphere. But the pleasure is destroyed by a crocodile that attacks the elephant king and threatens to drown him under water. The elephant king who is used to power suddenly discovers he is helpless and no one can help him. He, therefore, turns to the one force in the universe that is Lord Vishnu. With his trunk he raises a lotus flower and prays to Vishnu and Vishnu immediately comes and rescues him from the dreaded crocodile.

The story is a spiritual allegory: Gajendra representing our mind which is seduced by charms in the material world, embodied as the lotus lake, and the strife of life is represented by the crocodile, liberation from which can only happen through devotion or bhakti, embodied in the lotus flower and raised by the elephant to Vishnu.

The second level at which eroticism is described is in the relationship between Vishnu and Lakshmi. The story goes that when Gajendra cries out for help, Vishnu has his beloved Lakshmi in his intimate embrace when he suddenly stops paying attention to her, causing her to chuckle. We are told that the Lord did not say a word to his beloved, or straighten his long hair that fell wildly above his ears, or even let go the end of the sari, as he rushed out to save the elephant-devotee.

Later, when Vishnu throws the discus at the crocodile, it is described as the sun-god plunging into the pool to make love to the lady lotus hidden in the lotus pond.

Eroticism, sensuality and romance is thus made a part of devotion. Devotion is not separated from the body. This approach to devotion is sorely missing in stories today. We don’t mind vulgarity in secular stories however. But, when a mythological tale is told, storytellers are very careful not to make it remotely erotic or sensual for fear of angering the public who equates any form of sexuality and sensuality with vulgarity. This is revealed in the censor board’s relationship with sexuality and sensuality and matters of religion. This is because male monks of India dominate religion and they still read Hindu tales through the outdated Victorian lens.