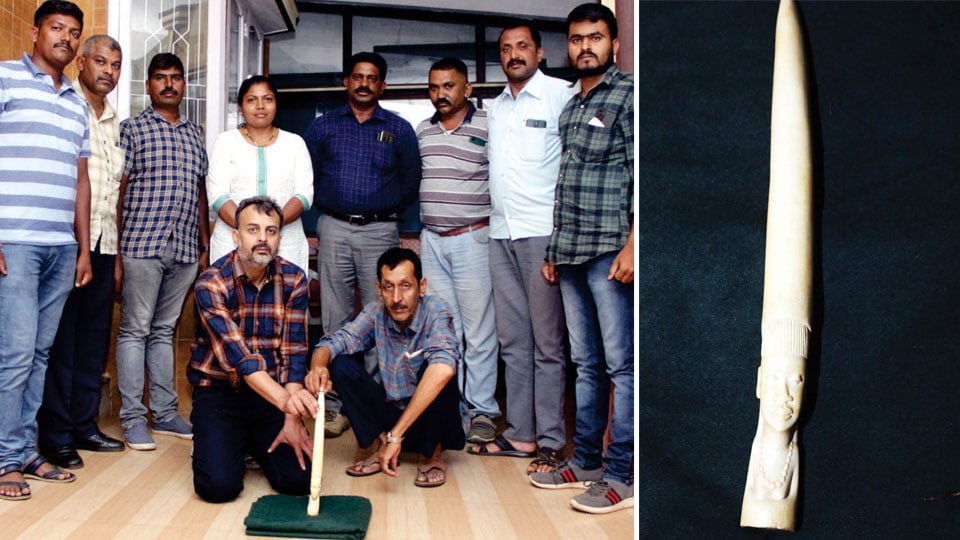 Madikeri: An exquisitely carved ivory trophy with a face of a woman wearing beads and a headgear has been seized in Madikeri last evening and two persons have been arrested. They were trying to sell the ivory on the Mysuru-Madikeri Highway.

Acting on a tip-off, the Criminal Investigation Department (CID) Forest Cell raided a location on the Highway near a burial ground at Chain Gate Madikeri and made the arrest. The arrested have been identified as Rafiq Ahmed Khan and Fazil Khan.

The accused was looking for prospective buyers for the trophy and were moving in a suspicious manner with a bag containing the carved piece. The exact weight, length and the value of the piece in the international market have not been revealed yet and the accused are being interrogated about the source of the elephant tusk and the craftsmen who carved the ivory.

The CID sleuths did not rule out a flourishing racket of ivory trade and said that a detailed investigation will be carried out. Normally plain tusks are traded and they get caught. “But here, a carved ivory has been seized and we have to gather information from the accused regarding the supply chain and how it reached Madikeri,” a source told Star of Mysore.

The ivory will be sent for tests to ascertain its origin. According to Forest Department officials, the transaction of elephant tusks has been banned internationally as per CITES treaty.

CITES stands for Convention on International Trade in Endangered Species of wild fauna and flora. In total, 175 countries of the world are its members that bans trade of endangered species such as tigers, lions and their body parts. India became member of the treaty in the year 1976.

A licence is required for possession of animal trophies including tusks. Not many people are aware of the existing laws and if someone is found with trophies without a valid licence of possession, they can be punished under Wildlife Prevention Act and also IPC. Tusks are one such item, an officer said.

READ ALSO  Govt. houses wait for a VVIP to be handed over to victims