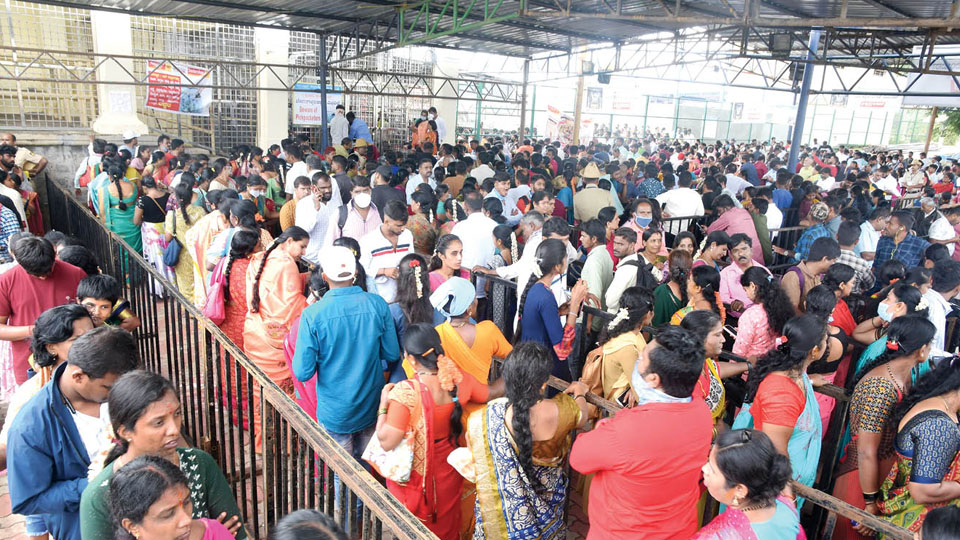 Mysore/Mysuru: Amidst clear skies and bright sunshine, thousands of devotees thronged Chamundeshwari Temple atop Chamundi Hill this morning on the first Ashada Friday that fell on the first day of the Ashada month of July. The Hill temple was opened for devotees after a gap of two years owing to COVID pandemic, much to the delight of devotees who were seeking to have darshan of the deity in all eagerness.

The special pujas and rituals associated with Ashada Friday, began as early as 3 am, with the performance of Mahanyasapoorvaka Rudrabhisheka, Abhisheka, Archane, Mahamangalarathi etc. Though the devotees had lined up before the temple in the wee hours, they were allowed entry to the temple after 5.30 am after all the rituals were performed.

The entry to the temple was divided into three categories — Dharma Darshana (free entry), Rs. 50 and Rs. 300 tickets for special entry and there were separate lines for each category. The Police had made elaborate arrangements to prevent crowding before the temple, by barricading the entire area as a regulatory measure.

The devotees coming by road and hill steps, were asked to walk on the road behind the Hill Temple to reach Mahabaleshwara Temple, from where the lines were formed. The authorities had made necessary arrangements to ensure that all devotees get darshan in an orderly and organised manner.

The Police had installed CCTV cameras at vantage, strategic and other key points in order to keep a constant vigil on suspicious movements and to prevent crimes such as pick-pocketing, robbery, chain -snatching etc.

After having darshan of the deity, most of the devotees walked to the multi-level parking lot, where the City’s Chamundeshwari Seva Samithi had organised distribution of special Horlicks Mysore Pak as Prasadam and Annadana. The Samithi has been distributing Prasada to the devotees for the past 18 years.

As all types of private vehicles were banned entry to the Hill on Ashada Friday, the KSRTC had deployed 50 buses to ferry devotees free from Lalitha Mahal Helipad grounds to the Hill temple.

The devotees, after arriving at the Helipad, were asked to park their vehicles at an 18-acre plot adjacent to the ground, where the authorities had marked separate parking lots for two-wheelers, three-wheelers, four-wheelers and other classes of vehicles.

Before boarding the waiting KSRTC buses, all the devotees were checked for two doses of COVID vaccination, which data is recorded in their respective cell phones.

Those who had not taken two doses, were asked to produce RT-PCR test negative report of less than 72 hours.

RT-PCR tests on the spot

The Health Department had set up booths  for conducting spot RT-PCR tests on devotees who failed to produce vaccine certificate or negative reports.

Many devotees, especially from rural areas who were either unaware of COVID vaccination check or failed to bring along their cell phones, had to return a disappointed lot.

Also, a good number of devotees did not turn up for the first Ashada Friday as false rumours on mandatory production of Aadhar card had spread among villagers.

Though thousands of devotees  took part, in general, the number of devotees for the first Ashada Friday was less than what the authorities had anticipated, according to sources.

A large posse of Policemen, including Mounted Police,  was deployed as a security measure all round the Hill temple.

MLAs S.A. Ramdas and G.T. Devegowda and MLC A.H. Vishwanath were among the elected representatives from the city who had darshan of the deity on this auspicious day today.

The second Ashada Friday falls on July 8, the third on July 15 and the fourth and last one on July 22. The Chamundeshwari Vardhanti will take place on July 20.