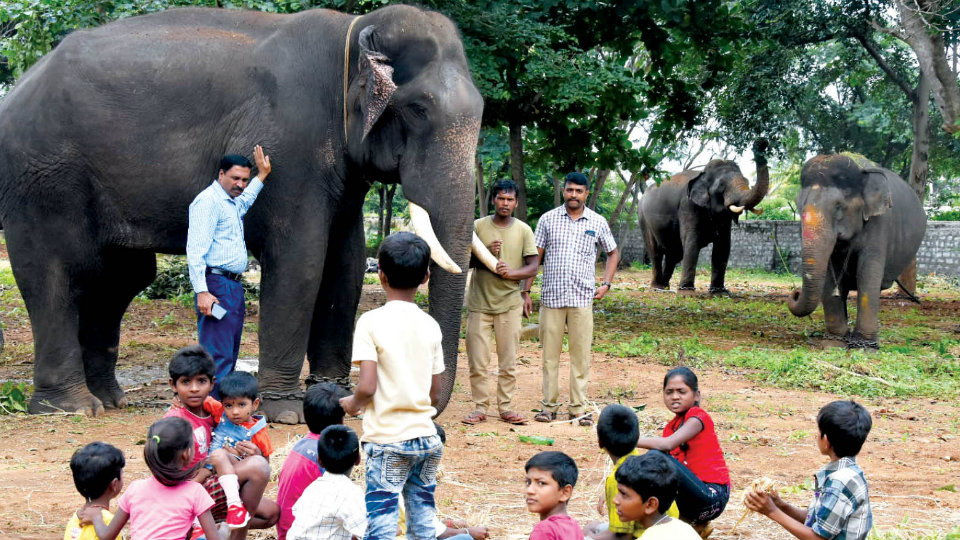 Mysuru: The first batch of six elephants that arrived in trucks at about 6 pm yesterday evening were housed in Aranya Bhavan premises at Ashokapuram here. Their health conditions were checked upon their arrival by Veterinarian Dr. D.N. Nagaraju and were found fit.

Today morning, the dung of all the elephants were examined by Dr. Nagaraju. The elephants are being fed Kusure (a ball made up of dry grass, paddy, salt, jaggery and coconut) in the morning and mixture of green grass, dry grass and banyan leaves later.

Meanwhile, the public today morning thronged Aranya Bhavan to have a glimpse of the six Dasara elephants especially Arjuna to take selfies.

Lashmipuram Police along with Forest Watchers and Guards, who are providing security to the elephants were seen preventing the public to venture near the pachyderms.

To enter Mysore Palace on Aug. 26

The six Dasara elephants will be offered puja by the Forest Department officials at 10.45 am on Aug. 26 and will be taken to the Mysore Palace. The elephants will march via Ashokapuram Road, Ballal Circle, RTO Circle, Ramaswamy Circle, Chamaraja Double Road, Gun House Circle and will enter the Palace through Jayamarthanda Gate.

READ ALSO  15,000 bulbs in Mysore Palace to be replaced

The elephants will be accorded a warm welcome by performing the traditional puja by the Mysore Palace Board at 12.30 pm. Priest S.V. Prahallad Rao will perform the puja.

The six elephants will undergo weight checking either on the same day evening or the next day morning at the private Electronic Weighing Centre on Dhanavantri Road.

Deputy Commissioner Abhiram G. Sankar, who is also the Dasara Special Officer has written a letter to the New India Assurance Company Divisional Manager in this regard. Accordingly, Rs.40 lakh is the insured amount for 14 Dasara elephants and the premium paid is Rs.44,840.

The validity of the insurance is from Aug. 22 to Sept. 15 and if any claim has to be made it should be done within three days of the incident. It has been directed to take the insurance in the name of Deputy Conservator of  Forest (Wildlife).