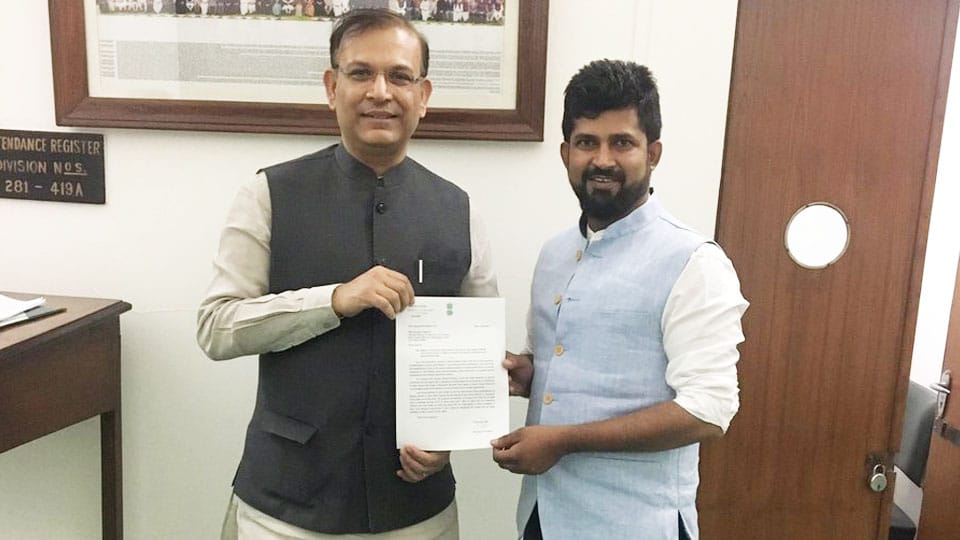 New Delhi – Mysuru-Kodagu Member of Parliament Pratap Simha has met Minister of State for Civil Aviation Jayanth Sinha and has appealed to him to restart flight services from Mysore Airport.

The MP told the Minister that Mysuru could be covered under the Union Government’s ambitious Ude Desh ka Aam Nagarik (UDAN) scheme.

In his representation, Pratap Simha said that Mysuru being a prominent tourist destination can be a potential place for the Regional Connectivity Scheme under UDAN that will revolutionise the civil aviation sector by connecting remote and unconnected areas.

As Mysore-Chennai sector has been selected under the scheme, a proposal of connectivity to other cities like Cochin, Hyderabad, Mumbai, Goa, Jaipur from Mysuru could be examined to promote tourism and business opportunities in Mysuru, he told the Minister.

The MP also told the Minister that the second phase of development of Mysore Airport at Mandakalli to cater to the operations of wide-bodied aircraft must be taken up on fast track basis. In addition, the existing runway must be extended from 1,740 metres to 2,600 metres, the MP told the Minister.