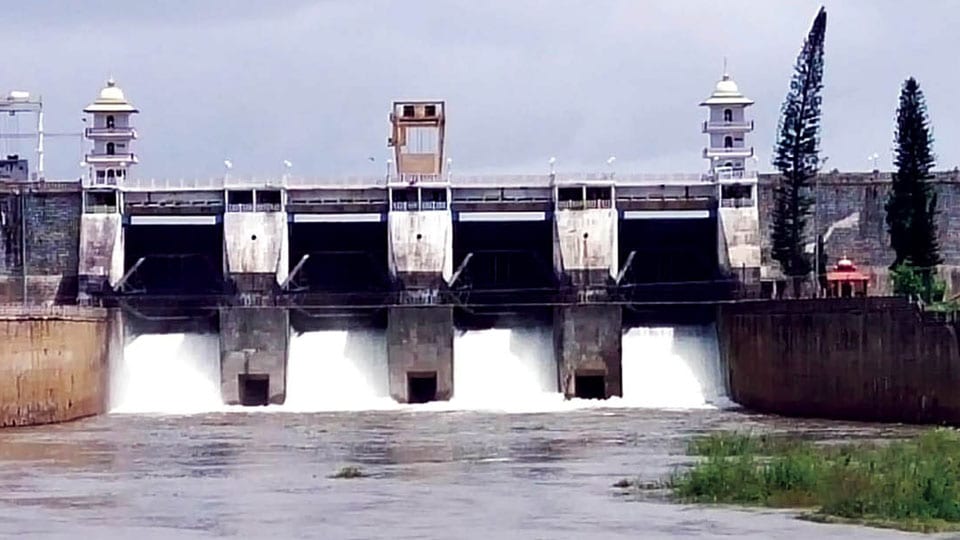 H.D. Kote: With monsoon having set in and its catchment areas in Kerala’s Wayanad district and surrounding areas, receiving heavy rains for the past several days, the Kabini Dam at Beechanahalli in H.D. Kote taluk of Mysuru district is just 7 ft short of getting full to the brim.

As the Dam is fast approaching its maximum water level, the authorities have asked people living along the river bed to move to safer places. The Dam’s Executive Engineer C.B. Suresh Babu said that people living along both the sides of the river basin  have been asked to shift to safer places as a precautionary measure as the discharge from the  Dam is expected to increase by the day with catchment areas receiving heavy rains for the past few days.

He further said that the discharge will be based on the water  inflow that the Dam records every day. People have also been asked to shift their movable properties and  livestock to safer zones, he added.

As the Dam received a huge inflow of 16,200 cusecs water, a total of 5,000 cusecs, including 3,000 cusecs from four crest gates and 2,000 cusecs from outlets of Subhash Kabini Power project were released from the Dam on Saturday (June 19).

Farmer leader Bidarahalli Chandrashekar expressed his happiness about the Dam getting filled up faster as compared to last year. Pointing out that intermittent rainfall in Wayanad for the past several days had resulted in the Dam filling up faster, he said that the Dam water will be of much help to the farmers for crop cultivation in Kharif season.

H.D. Kote Kabini Dam
Lubrication of KRS crest gates begins
Back in a day ! MUDA Commissioner transferred on Saturday, back on Sunday