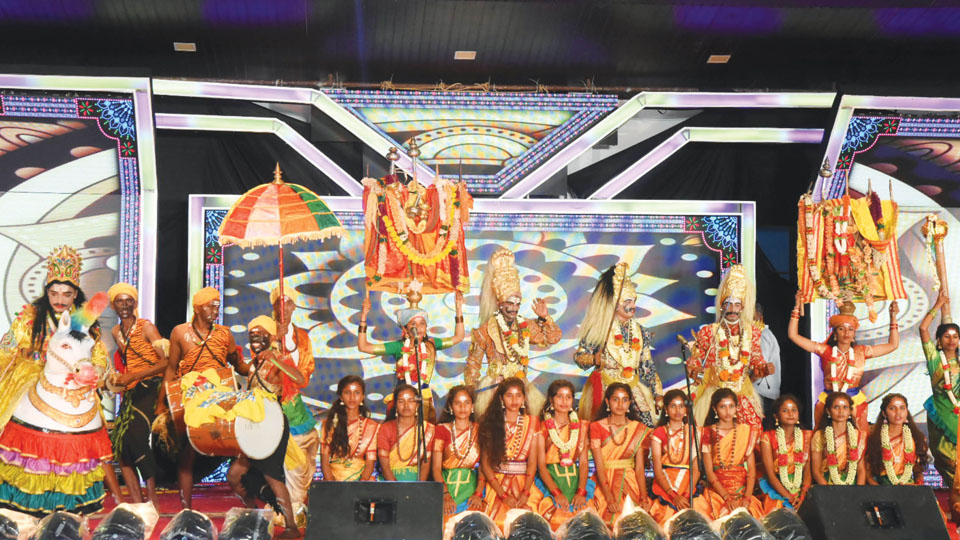 Mysore/Mysuru: Last evening’s performances at Yuva Sambhrama centred around folk art and the 75th year of Independence. This apart, memories of Dr. Puneeth Rajkumar too were brought alive on stage by performers.

But the main attraction for the evening at Manasagangothri Open Air Theatre was the eye-catching folk art performance by the teams from Kuvempu Institute of Kannada Studies and from Hunsur’s Gavadagere Government PU College. Dancers performed many folk forms including puja kunitha, dollu kunitha, kolu kunitha, veeragase and garudi gombe.

The folk performances left the audience spellbound and they were glued to the ground and even danced along with the performers. Likewise, performances from Bishop Norman Carr Sargent College of Commerce and Business Management, Periyapatna BGS First Grade College, JSS B.Ed. College Suttur, Sathanur PU College Kanakapura, performed to the themes that focussed on the Kannada language, soil, water and culture.

Performing to the theme of Azadi Ka Amrit Mahotsav, students of T. Narasipur Government PU College displayed the heroic acts of the soldiers on the borders and hoisted the national flag and sang ‘har ghar tiranga’.

Specially abled children from Maithri Charitable Trust performed ‘Appu dance’ that earned the appreciation of the audience. Though challenged physically, they proved that they are second to none and conveyed the message of the need to provide equal opportunities for all, without an element of sympathy.