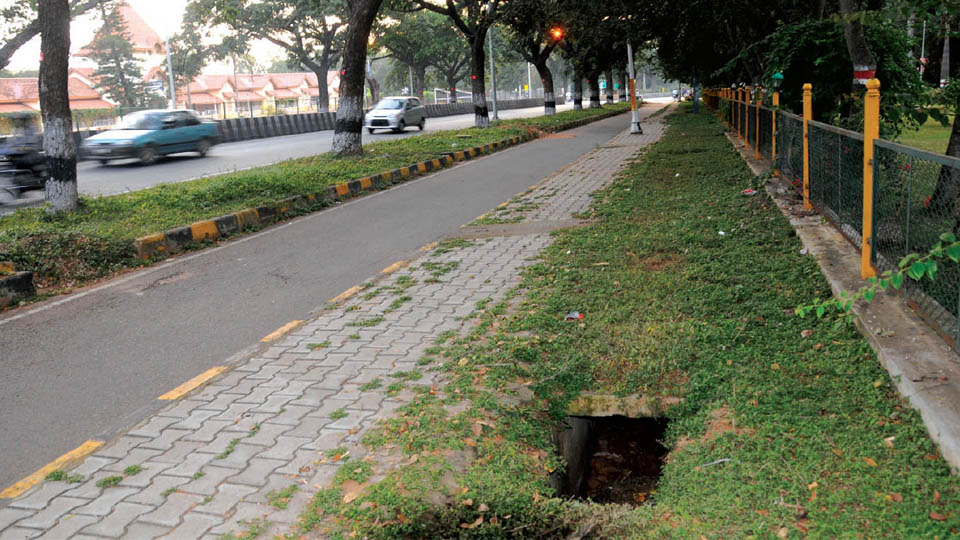 Footpaths in Mysuru are unsafe

Mysuru:  The Mysuru City Corporation (MCC) is relentlessly pursuing the mission of clearing the footpaths from hawkers and eating joints. However, it has completely failed in keeping them clean and fit for pedestrians to walk.

Except for a few footpaths in the city, others are in bad shape. If the pedestrians are even a bit careless they can land in trouble. One of the prime examples of this state of affairs is the footpath on Lalitha Mahal Palace Road near Administrative Training Institute (ATI) and Karanji Lake, which is a tourist spot where even nature lovers congregate.

This footpath is in a state of disrepair. It is a sad and ugly sight. There is a storm water drain here and in many places, the concrete slabs are broken. One can also see wild growth of bushes and weeds that covers the ditches. If a pedestrian accidentally steps on it then he could just go down twist and fracture his leg.

As the drain is at least three to four feet in depth, it could also endanger one’s life. In the guise of helping the citizens and clearing the footpaths, the MCC has however failed to maintain the footpaths. It claims that it has hundreds of crores of grant for providing basic facilities. But nothing of this money is seen on ground, as footpaths continue to sport a sorry spectacle.

The MCC Corporators and Administrators are very vocal in demanding and collecting taxes and issuing notices. However, when it comes to the facilities that they need to provide to the people, they do not show the same enthusiasm. 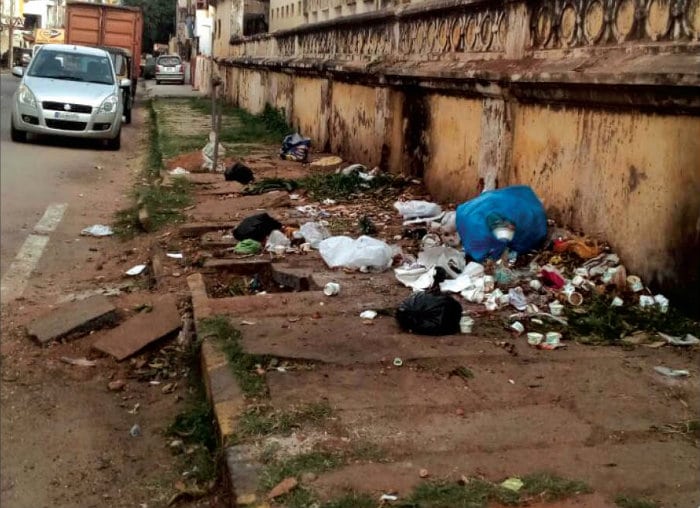 Garbage strewn on the footpath on Krishna Vilas Road

Why should the citizens cry for good roads, footpaths, lights and other basic amenities? Is it not a sacrilege on the part of the city’s fathers to ignore the fundamental rights of the citizens?

The citizens have sent a warning that if there is a problem to life and limb then the City Corporation will be held responsible. A couple of months ago, a young woman after a hard day’s work was returning home on her two-wheeler. It had rained heavily and the pothole was filled with water. She inadvertently drove on it fell down and broke her hand. She was not able to attend work for more than three months.

Is it not the duty of the Corporation to see that potholes are covered? Who will compensate her for the loss of salary and untold misery and physical hardship she suffered?

Disappearing footpaths: On Krishna Vilas Road very little footpath is left. Even that looks lost as it is covered with bushes and weeds. Right next to Maharani’s PU Composite College compound, mounds of garbage collects every day.

The school and college students pass by this road regularly to reach the bus stand. As the footpath is dirty and very small, instead of walking on it, the students are forced to walk on the road amidst traffic.

Before the Corporation blames the citizens for lack of interest in participating in the Swachh Survey, it is better if it takes care of all these burning issues and sets it right.