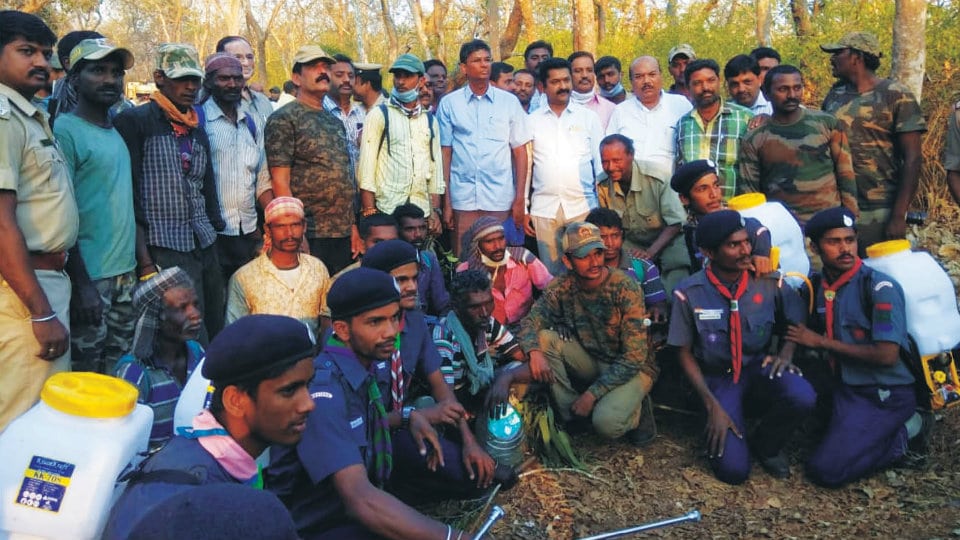 Speaking after visiting the fire spots along with forest officials, the Minister said that about 2,500 hectares of forest has been destroyed by the fire and added that the first priority was to control the fire and later ascertain the extent of damage caused by it.

“It appears to be an act of sabotage and one person has been taken into custody for interrogation,” he said and opined that there is a need to adopt modern technology to douse forest fires in future.

Thousands of acres of forest land have been destroyed in the blaze and has also spread to the core area, endangering the lives of many wildlife species, including other flora and fauna.

The wildfire intensified due to strong winds and as a result, fire extinguishing operations by foresters, firemen, volunteers and villagers took a beating as they continue to bring the fire under control. Strong winds and dry grass have aided the fire to spread towards other parts of the forest.

Due to strong winds, the fire which had spread to Gopalaswamy Hill, coming under Bandipur Forest Range has destroyed nearly 75 percent of forest and despite efforts to control it, the fire spreading towards Maddur Forest range.

300 volunteers: Nearly 300 volunteers from Mysuru, Bengaluru, people from the surrounding villages and many Scouts and Guides cadets are helping the Forest Department staff in dousing the fire.

According to an official, nearly 100 volunteers had reported yesterday and were helping the staff, who are working nonstop day and night to contain the fire. The cadets were not only seen dousing small fires, but were also supplying food and water in department vehicles to forest personnel at various points inside the forest.

Braving heat caused by fires, the forest staff, armed with automated water sprayers strapped on their backs, the forest staff and fire fighting personnel are toiling day and night to stop the spread of fire. Six fire tenders were pressed into service at Bandipur and Gopalaswamy Hill yesterday night.

Fire was also reported near Veeranahosalli at Nagarahole Reserve Forest yesterday afternoon, said to be allegedly lit by miscreants.

The fire, which spread quickly due to high velocity wind, was spreading towards Kerala side. Forest Department staff of both the States have been alerted to take steps to prevent fire from spreading further.