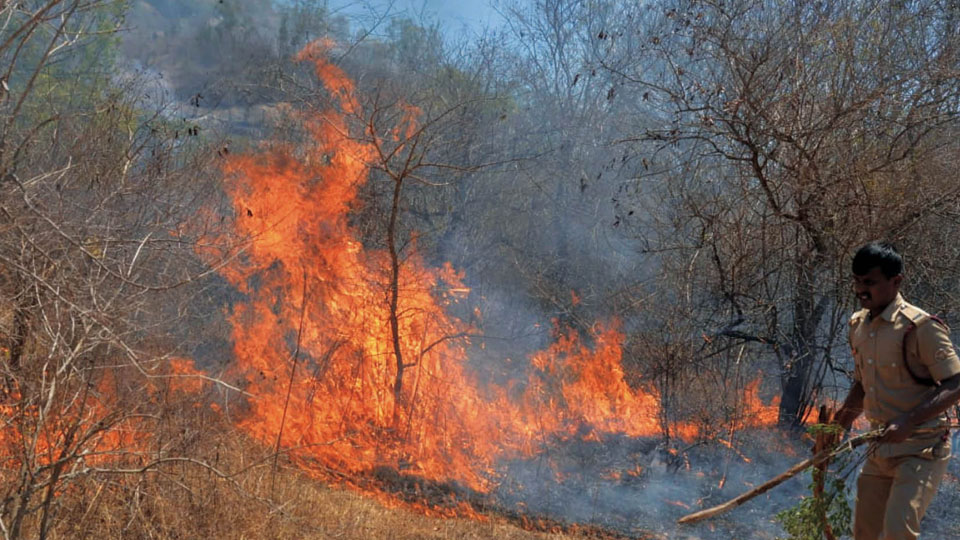 Mysuru:  Many fire mishaps were reported in city yesterday with a part of Chamundi Hill catching fire this noon.

Fire was spotted on Chamundi Hill near Uttanahalli junction on Mysuru-Nanjangud road which began to spread due to dry leaves.

Soon, fire tenders from Saraswathipuram rushed to the spot and began to douse the fire.

Students and passersby volunteered on their own and after taking instructions from the Fire officials, they began to help the Fire personnel in dousing the fire.

The process of extinguishing the fire was still going on when we went to the Press.

Yesterday, fire was reported at the Railway unit on Manandavadi Road causing losses.

It is learnt that miscreants’ lit fire to piles of wastes such as discarded rubber, old shoes, oil wastes etc. resulting in fire destroying materials and also spreading to surrounding places causing panic among the residents.

District Forest Officer K.P. Gururaj and Station Officers Shivaswamy, Nagaraj Urs and Assistant Station Officer  Panditaradhya and staff, who rushed to the spot along with six fire tenders, managed to douse the fire in a six-hour-long operation.

Meanwhile, fire was also reported at Kiralu village in the taluk resulting in the fire destroying about four acre of sugarcane crops, three acre of banana plantation was destroyed in Maratikyathanahalli in Mysuru taluk and hay stacks at Hullahalli and Nerale villages in Nanjangud.