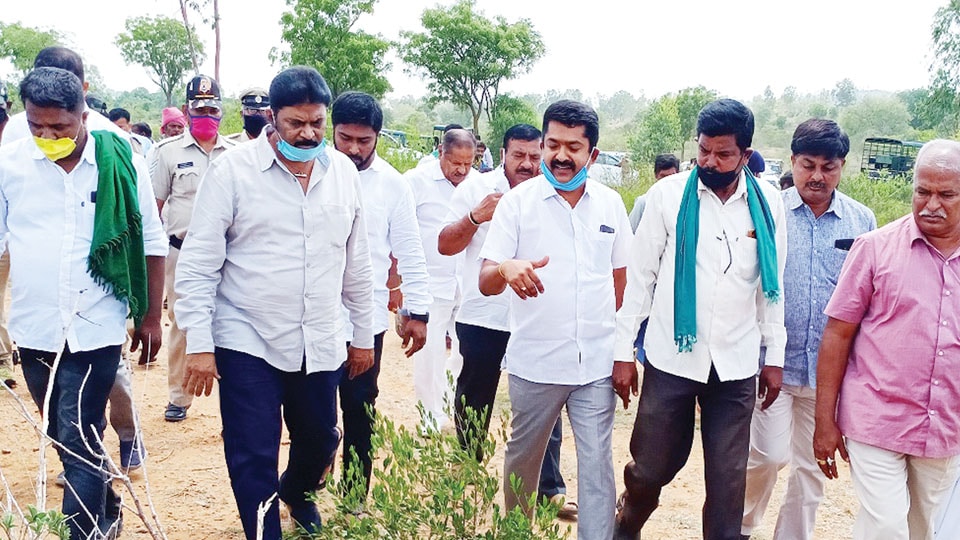 Gundlupet: Following tiger attacks on livestock at villages bordering Kundakere Range since 20 days, Forest Minister Anand Singh along with the officials of the Forest Department conducted an inspection at Kadabur village recently and listened to the grievances of farmers and villagers who have lost their livestock.

As farmers and villagers had demanded the capture of the tiger which had killed more than 20 cattle in the region, the Forest Minister personally visited the villagers and held discussions with them.

MLA C.S. Niranjan Kumar, who accompanied Minister Anand Singh, brought to his notice that three tigers had come out of Bandipur Tiger Reserve creating tension in the villages and hence the State Government should give permission to capture the tigers. He urged the Minister to take steps to capture the tigers immediately and relocate them elsewhere.

Meanwhile, farmer leaders Sampath and Kadabur Manjunath, who met the Minister, told him that the solar fences installed in forest borders had become defunct and even trenches were filled with mud which had resulted in frequent incidents of wild animals raiding human habitat.

The farmer leaders also apprised the Minister that requests to install Railway track barricades is being made since 10 years which was being neglected.  Tigers and leopards chasing the deer were jumping over the trenches and entering villages, they said and accused the Forest officials of not taking any action to solve the problem.

The farmer leaders urged Minister Anand Singh that if a 15 ft. tall chain link mesh is installed to the rail track, this would prevent wild animals from coming out of forest. Minister Anand Singh assured them he would instruct the Forest officials and added that the operation to capture the tiger would commence soon.

Meanwhile, a few farmers told Minister Anand Singh that about 15 years ago a private person had purchased about 1,500 acre land in forest border from farmers to install solar fences to prevent wild animals from entering villages. That person had obtained loans on the lands he had purchased but had not done anything which had resulted in overgrown weeds and bushes in the lands and wild animals making it their habitat.

They urged the Minister to take steps to get the land returned to the original land owners so that they could take up farming or include the land to the forest so that the forest could be expanded considering the increase in wild animals in the forest. Minister Anand Singh, who listened to the farmers patiently, told them that he would collect information from the Revenue Department officials in this regard.