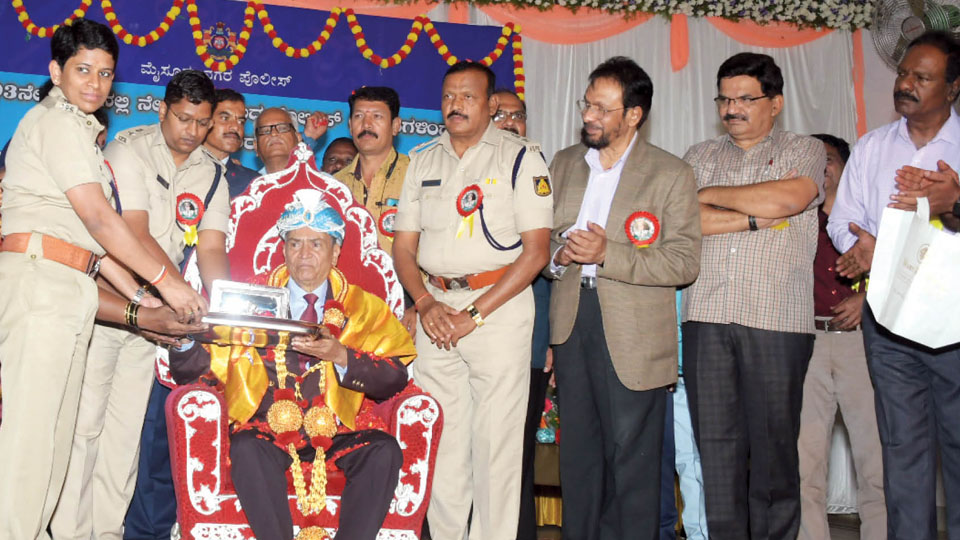 Along with him, former Deputy Commissioner of Police (Law and Order) Syed Ulfat Hussain (now retired IGP) and late Keshavaiah DCP (Crime and Traffic) too were honoured. Keshavaiah’s son Dr. Satish, who is serving as the Head of the Department of Ophthalmology at K.R. Hospital received his father’s honours. Keshavaiah passed away in 1997.

The event was organised at Police Bhavan this morning by the Policeman who served Mysuru city in 1993 and all those constables and officers including women Police who were benefited by the three officers were present. Many of them were promoted by Kasturirangan after recognising their contributions.

As the former officers and Dr. Satish entered the auditorium, they were warmly welcomed and flowers were showered on them. Many present and retired officers fell at their feet to take their blessings. Many recalled how Kasturirangan, Syed Ulfat Hussain and Keshavaiah changed their lives and also how they initiated many citizen-friendly measures.

Festive atmosphere prevailed at the Police Bhavan as the dignitaries climbed the stage amidst loud cheers from their juniors. Over 50 Policemen who served the Department in 1993 and retired now were also felicitated.

The contributions of Kasturirangan were read out and the audience were told how he controlled rowdy elements when he was the Commissioner. “He appointed over 300 women Police and promoted many Sub-Inspectors to Inspectors. It was Kasturirangan who reigned in unruly auto drivers who fleeced customers and fixed a price based on distance. He was well-known to the people of Mysuru and his contributions are etched in the memory of Mysureans,” a speaker said.