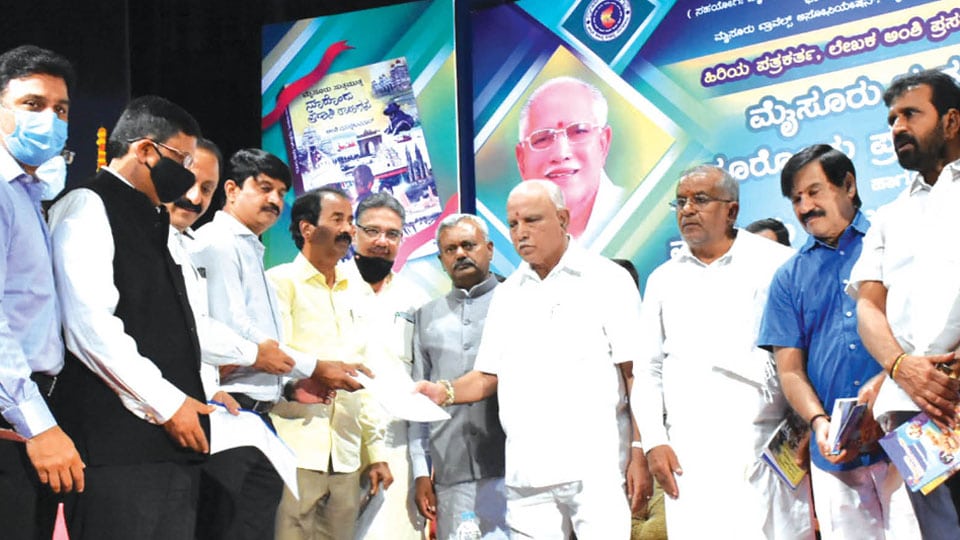 The former MLA presented a memorandum in this regard to the Chief Minister at a Tourism Book release programme organised at Kalamandira here     on Saturday..

Highlighting the benefits of making Mysuru a health city, Vasu in the memorandum said that AIIMS and Kidwai Hospital centres will be complementary to Mysuru becoming a  healthcare hub.

The memorandum also included a host of other demands, which chiefly included establishment of Mysuru Industrial Township Authority, Development of Industrial Cluster, reservation for small-scale industries in KIADB industrial areas, setting up of a full-fledged export centre, revival plans for sick industries, installation of solar lights in industrial areas, construction of an exclusive helipad and a truck terminal and infrastructure improvement in all industrial areas, among others.

The Akhila Karnataka Book Publishers Association too submitted a memorandum to the CM seeking bulk purchase of books by the Government for libraries. The Association highlighted that the Government has not purchased books selected in 2018-19 for want of funds, which has resulted in problems for the publishers.

The Association wanted the Government to allocate at least Rs. 30 crore in the forthcoming budget for bulk purchase of books for libraries The memorandum was presented by the Association’s Honorary President and senior Littérateur Dr. C.P. Krishnakumar and President D.N. Lokappa.

Mysuru Hotel Owners Association, led by its President C. Narayanagowda  too submitted a memorandum to the Chief Minister. The memorandum contained a Nine-point charter of demands, which included setting up of Dasara Development Authority, Mysuru Tourism Authority, appointment of a brand ambassador for tourism promotion, necessary measures for building a rope-way  to Chamundi Hill, 2-year tax waiver for hotel buildings in the wake of COVID-19 crisis, an uniform entry tax for tourist vehicles as in other Southern States, establishment of a Hotel and Hospitality Industry Training Centre in Mysuru, necessary measures for issuing CR (Completion Reports) to commercial buildings and establishment of Film City in Mysuru itself as earlier proposed.