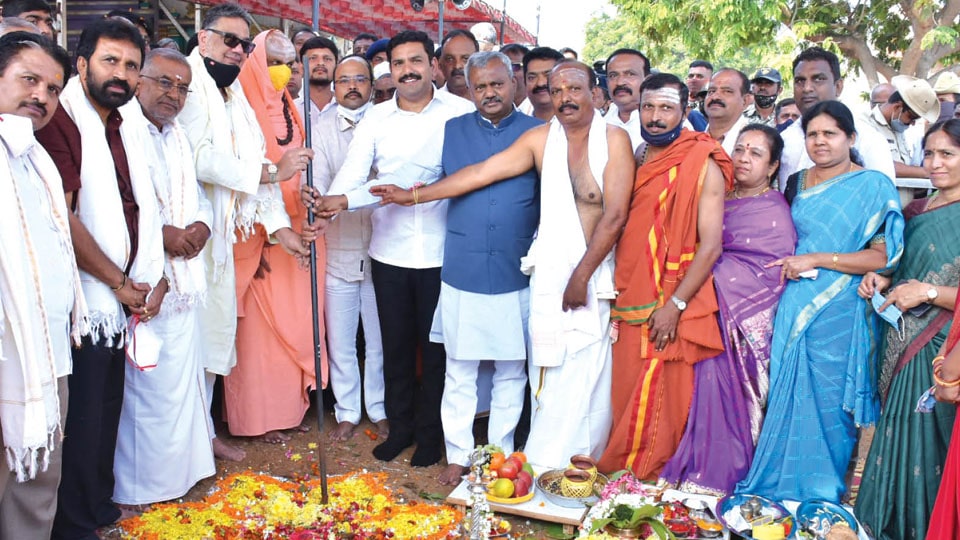 Mysore/Mysuru: Stating that the intensity of light is more important than the source from where it emanates, State BJP Vice-President B.Y. Vijayendra maintained that Veerashaiva-Lingayat community has the strength to become the leading light of the entire world.

He was speaking after laying the foundation stone for the new building of Mysuru District unit of All India Veerashaiva Mahasabha at JSS Layout First Stage near Basaveshwara Circle on Dr. Rajkumar Road here yesterday.

Noting that Mysuru is a Punya Bhoomi known for its spirituality, Vijayendra, who is the son of Chief Minister B.S. Yediyurappa (BSY), heaped praises on the erstwhile Mysuru Maharajas for making Karnataka a prosperous State. Pointing out that Suttur Mutt is like Aramane-Gurumane, he said that Veerashaiva-Lingayat community has shaped itself as the protector of all sections of the society.

Contending that Nalwadi Krishnaraja Wadiyar was a strong proponent of Basava Tatva, he lauded the role of Mutts in serving all classes of the society through programmes like Anna Dasoha and Jnana Dasoha.

Stressing on the importance of acquiring knowledge, he said that though wealth can be snatched, the knowledge acquired by a person cannot be snatched by anyone through any means.

Referring to his father B.S. Yediyurappa, Vijayendra said that BSY has become the CM of the State for the fourth time because of the wish of the people.

Reflecting on the ongoing Movements by different castes and communities of the State seeking reservation, he said that such problems are not new to Yediyurappa. Highlighting the grit and determination of his father in facing crisis and adverse political situations, he said that BSY will continue to serve the State as long as the blessings of people and Mutts will be there. He further said that BSY has often called himself as Jana Sevaka.

Asserting that it is Varuna Assembly segment that gave him a political foundation, he said that he would continue to work for the people within the perimeters of the Constitution with the blessings of his father, the people of the State and Seers.

Contending that he has special affection for Mysuru, Vijayendra appealed District Minister S.T. Somashekar to make all out efforts for bringing one of the seven Textile Parks announced by the Centre to Mysuru and also to ensure that the Film City, which was first planned in Mysuru is not shifted to Bengaluru    for any reason.

District Minister Somashekar, in his address, said that the economy of the State, which was shrinking due to the outbreak of the deadly COVID-19 pandemic, has begun to look up in the past couple of months, which has given some relief.

Assuring that he will make best efforts to ensure that Mysuru gets it due share in the forthcoming budget, he said that he was working out plans for providing shelter to all the shelterless, as directed by the Chief Minister.

Suttur Seer Sri Shivarathri Deshikendra Swamiji, who graced the occasion, made a reference to the ongoing Movements undertaken by different communities seeking reservation and other social benefits.

Noting that there are marginalised and downtrodden sections in every Samaja, he said that it is the duty and  responsibility of the Governments to ensure that all facilities and benefits meant for targeted sections of the society reaches even the last person.

The building is coming up on a 130’x140’ ft CA (Civic Amenities) site allotted by MUDA. The building that is estimated to cost Rs. 18 crore, is a four-storeyed structure, featuring an auditorium which can accommodate 1,000 people, a Skill Development Training Centre for students, a Competitive Exams Coaching Centre, a well-equipped library and space for carrying out cultural, religious and academic activities etc.