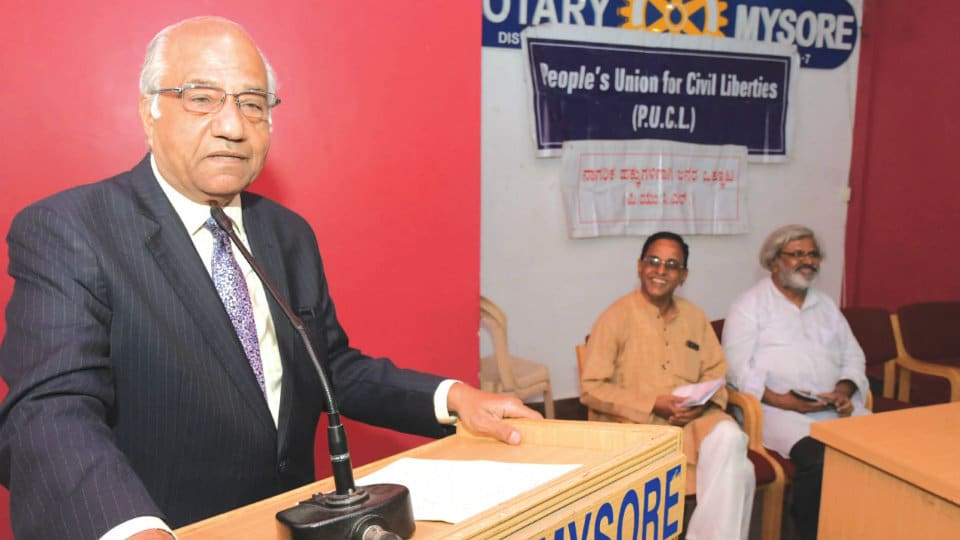 Mysuru: Former Supreme Court Judge Justice B.N. Srikrishna said that the Centre’s decision to grant citizenship to religiously persecuted minorities from other countries under the Citizenship Amendment Act (CAA) is not correct.

He was speaking at an interaction on the topic ‘Is Human Rights a British Legacy?,’ organised by the Peoples Union For civil Liberties (PUCL) at Ideal Jawa Rotary Hall on JLB Road here on Saturday.

Justice B.N. Srikrishna (Bellur Narayanaswamy Srikrishna), replying to a question by social activist Prof. Shabbir Mustafa, said that some organisations and individuals have moved the Supreme Court questioning the Centre’s decision to grant citizenship only to religiously persecuted minorities (barring Muslims)from neighbouring countries such as Afghanistan,Pakistan and Bangladesh. Now the Supreme Court’s ruling on the petitions has to be watched, he said.

Pointing out that the question  before us now is where the Muslim immigrants, who fail to get Indian citizenship will have to go, he clarified that the Fundamental Rights incorporated in the Indian Constitution was not a contribution of the British. Instead, the British tried to crush the rights of Indian citizens, he said and added that it is clear that the British invaded the country to loot the wealth here.

He further said that great works such as Mahabharata, Ramayana, Upanishads, Vedas and Kautilya’s Arthashastra, which portray Indian culture have a mention of Fundamental Rights.