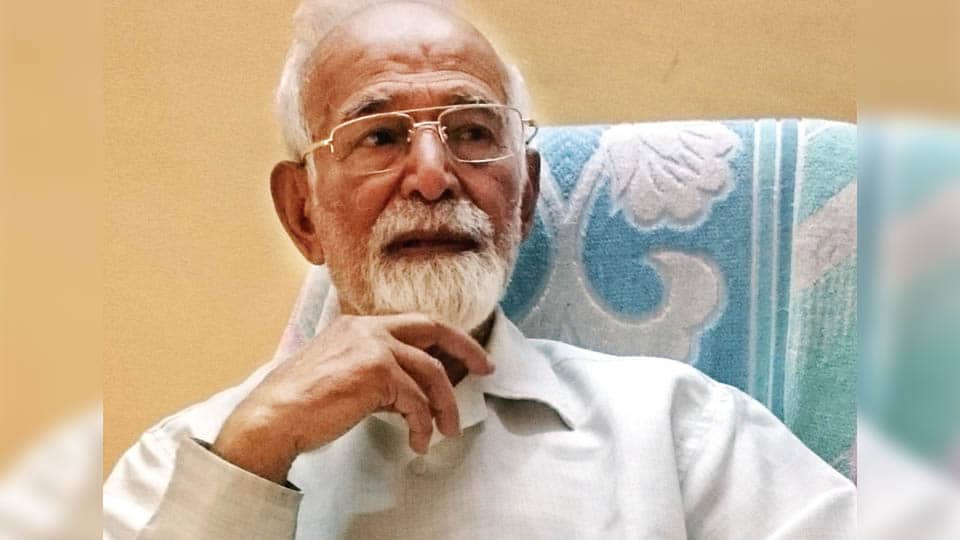 Though he has grown weak and his legs not as steady as before, Rev. Fr. Denis Noronha, the man behind establishing many educational institutions in Mysuru, believes he still can serve the Lord in his own little ways. “It is not easy to be 85 with five major surgeries and one minor surgery. With years this long, every day is an extra gift from God. I thank the Lord that at 85, He still entrusts me with a double ministry: the ministry of prayer and sacrifice,” said Fr. Noronha when Star of Mysore called on him at ‘Prashantha Nilaya’ in Bannimantap here last evening on the occasion of the Diamond Jubilee Year of his Priesthood [He will be completing 60 years of             Priesthood on April 8, 2017].

Considering his yeomen service to society, his well-wishers have organised a felicitation function and a Thanksgiving Mass on Feb. 26 (Sunday) at 10.30 am at Our Lady of Perpetual Succour Church in Srirampura, Mysuru.

A ‘Self-Made Man’, Fr. Noronha would often go out of his way only to help the poor, the downtrodden and the needy to bring them to the mainstream of the society either by helping them financially, by getting them jobs or at least recommending them to the right person.

Born on July 27, 1932 to a humble agricultural family in Tenka Belluru village of Bantwal taluk, Dakshina Kannada, Fr. Noronha traversed not only time but also the hearts of many, who came in contact with him. He decided to cultivate human beings to make them bloom as noble souls, which made him a priest of a different kind and a household name in Mysuru. He was the priest who took God to the people in the form of health, education and selfless service.

Fr. Noronha said, “One should not forget that one or the other day we have to give an account to God. If an individual remembers this, then there will be peace, love and good relationship in the society.”

Having joined the Seminary at a tender age of 13 in the year 1945, Fr. Noronha served in city and also climbed his way up the Church hierarchy as a Model Priest.

Fr. Noronha, as the Financial Administrator (Procurator), moved into the Bishop House in 1960 which was a turning point in his career as a Priest and also a turning point for the Diocese of Mysore as the Diocese comprised (then) of six districts of Mysuru, Mandya, Kodagu, Hassan, Chikkamagalur and Shivamogga.

He also held three main posts namely – Financial Administrator, Diocesan Director of Social Work and Secretary of Mysore Diocesan Education Society (MDES) — where he had a lot of people coming to him throughout the day. He used to give a patient hearing besides trying his best to comfort them and help them in their problems and requirements.

Fr. Noronha, who had close contacts with late Sri Balagangadharanatha Swamiji and is closely associated with Suttur Seer Sri Shivaratri Deshikendra Swamiji, used to give lectures at ‘Sarvadharma Sammelana.’

Having retired as Parish Priest on Jan. 12, 2014, at the age of 82, Fr. Noronha now stays at ‘Prashantha Nilaya,’ a Retirement Home for Priests of Mysore Diocese in St. Joseph’s Hospital premises, Bannimantap. He spends his day by meeting patients in the hospital, comforting or counselling them and by reading books.

No wonder, Fr. Denis Noronha, a visionary Priest, who considered the whole world as one family, is a household name in city even today.