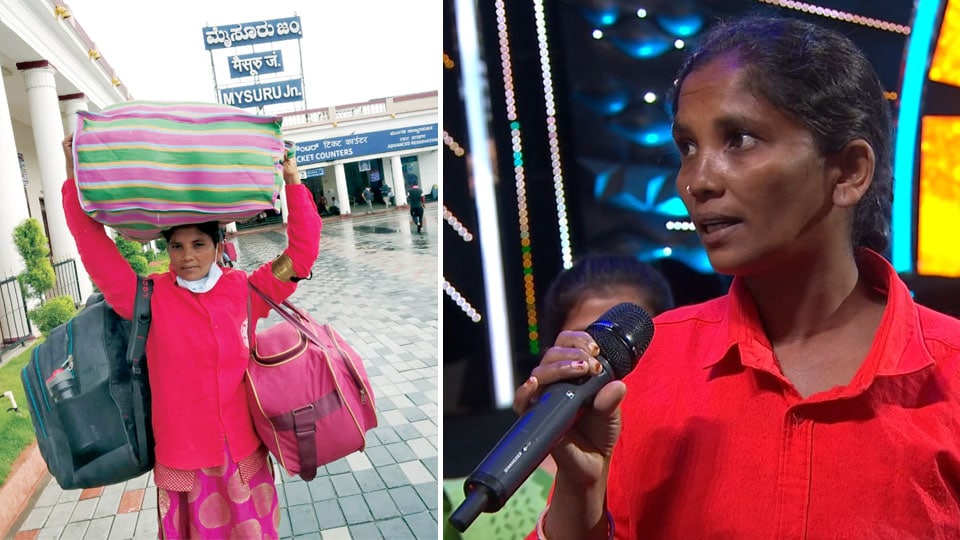 From Mysuru to Mumbai: Railway Porter Badge No. 16 takes her to ‘Indian Idol’ stage

She is alone but not broken. Her life is filled with tragedy, yet she is a dreamer. She is brave, graceful, independent, hard-working, confident and what not. Words fall short to describe her attitude towards life. Her journey of life is an inspiration to all women out there.

Next time when you are at the Mysuru City Railway Station, there are chances that you will come across 39-year-old Rizwana Banu, with a smiling face offering to carry your luggage. She is the only woman among the 60 porters at the Railway Station and she does the job as efficiently as the men.

Wearing Porter Badge No. 16, Rizwana has appeared on the stage of the country’s biggest singing TV reality show ‘Indian Idol’ in Mumbai on July 6 and this has made her the talk of the town. But the celebrity status has not got into her head and she still lifts passenger luggage, smiling. Her amiable approach gets her a few rupees more than the normal remuneration.

Life not a bed of roses

Rizwana lives in Shanthinagar and she lost her husband Javed Pasha in 2010. Javed was also a Porter at the Railway Station and after his death, the world came crashing on her as she had to take the responsibility of looking after the family including four children, parents and in-laws.

She was not qualified enough to get a job and she fell back on what her husband was doing for a living. Fortunately she got the job on compassionate grounds and she became the lone woman porter.

Sharing her life’s story with Star of Mysore, Rizwana said, “Initially I was scared to work amidst men as I was the only woman doing this job. I did not have friends and even passengers would ignore me thinking that I cannot carry heavy luggage. There were many depressing moments and many times I cursed myself for having been born as a woman.”

“I had no other option as I am the only bread-winner in the family on whom eight are dependent. I slowly gained confidence to work among men and even passengers started showing concern towards me. They sometimes pay extra money for my hard work.  It’s been 10 long years,” she says with a sigh.

On appearing on ‘Indian Idol’ stage, she said that she never thought of standing on such a huge and famed stage. “Though I was not a contestant, it happened to me unexpectedly. I got an opportunity to go to Mumbai through our mesthri Jalendra. The ‘Indian Idol’ show managers were looking for a lady surviving life despite odds. Somehow they contacted Jalendra and asked me to come to Mumbai,” she said.

“I was flying for the first time in my life. After I reached Mumbai they arranged for accommodation at a private hotel. The next day I was invited on the stage and a video of my entire journey was shown to the audience. Show judges Anu Malik, Himesh Reshammiya and Sonu Kakkar praised me,”  Rizwana recalled.

“Seeing the video that captured my life and struggle, everyone’s eyes welled up with tears. For me, I received the respect which I always wanted to earn. The anchor of the show Aaditya Narayan (son of singer Udit Narayan) announced that he would give me his one episode’s remuneration,” she said.

Rizwana got Rs. 1.5 lakh from the reality show. She plans to use it to clear a part of the Rs. 5 lakh loan taken for her daughter’s marriage. “Actually I watched the show and I am a big fan of contestant Mohammad Danish. But I never imagined that I would get an opportunity to be on the live stage,” she noted.

Life of a Porter not easy

“Earlier there were no lifts and escalators and porters had to carry the luggage using stairs. Now things have changed. I work 11 hours a day, from 6 am to 5 pm and whenever I have body ache, I take painkillers to be prompt at work the next day,” she said.

Lockdown was tough for Rizwana and her son sold tea to make ends meet. “I earn Rs. 300 a day, which is hardly enough but I have never complained and I am thankful to have at least this much. I love watching movies and dream of meeting the ‘real coolie’ Amitabh Bachchan one day,” she said and went about her routine.