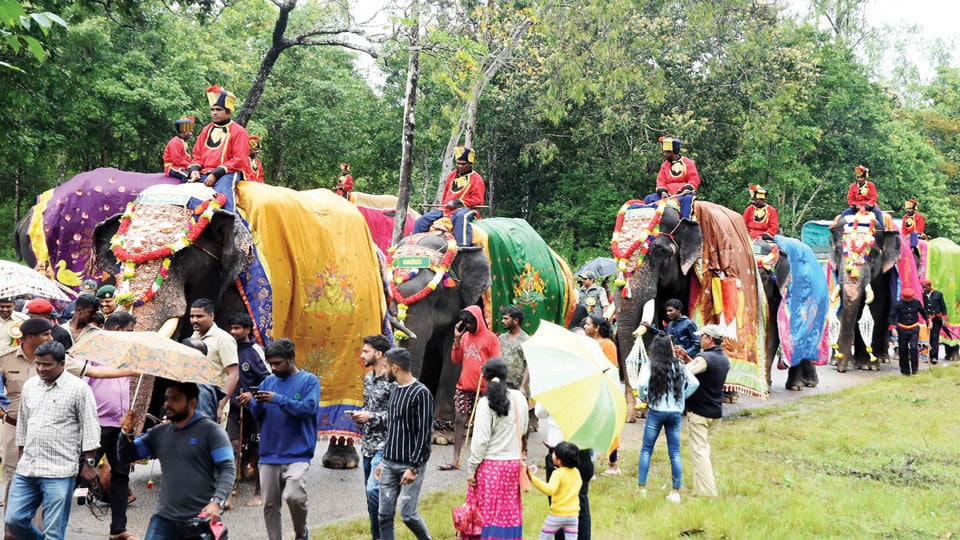 Major event at Veeranahosahalli after a two-year gap; half-a-kilometre march with folk troupes

Mysore/Mysuru: Signalling the official countdown to a grand Mysuru Dasara-2022, nine caparisoned elephants led by Abhimanyu — the Golden Howdah-carrying elephant — embarked on Gajapayana, their journey from different elephant camps to Mysore Palace this morning. The event was held on a grand scale after two years of the COVID pandemic and even the State Government has decided to celebrate the Dasara Nada Habba on a grand scale. In 2020 and 2021, celebrations were subdued.

The journey began at Veeranahosahalli Gate on the fringes of Nagarahole National Park in Hunsur taluk where the elephants were brought from forest camps. Though it rained heavily, it did not dampen the spirits and a symbolic half-a-kilometre walk was performed to the programme venue.

Today’s march was led by Arjuna, the earlier Howdah Elephant and he has been designated as a ‘Nishane Aane’ (the tusker that will move first in the Vijayadashami procession) and it is an honour considering his experience and services. He will be the ‘Nishane Aane’ for a couple of more years.

As the Mysuru District Minister, S.T. Somashekar performed the rituals along with the Priests and flagged off the elephant march. Forest Minister Umesh Kathi and other dignitaries were present. The puja was performed by Priest S.V. Prahallad Rao between 9.01 am and 9.35 am in the auspicious Kanya Lagna.

The rituals began with ‘Padapuja’ with ‘Arishina Kumkuma’ sprinkled at the feet of the elephants. Later, the elephants were fed with ‘Modaka’ and ‘Pancha Phala’ (five fruits).

These nine elephants will arrive at Aranya Bhavan in Ashokapuram, Mysuru, at about 4 pm tomorrow and will be housed in Aranya Bhavan till Aug. 10. On Aug.10, The team will enter the Mysore Palace through Jayamarthanda Gate between 9.20 am and 10 am in the auspicious Kanya Lagna.

Over 1,000 people including many school children attended. Due to incessant rains, the entire venue was filled with slush. Still, the organisers had strived to make it a grand event by erecting pandals and also metal sheets for the guests to walk on.

From the pages of history

Gajapayana is now a symbolic event which was once an elaborate affair where the elephants, mahouts, kavadis and families used to travel over 80 to 100 kilometres from the forests to Mysuru by foot. But in the present times, the elephants and the entourage symbolically march a short distance after which they are transported by trucks.

The tradition of Gajapayana began during the reign of Sri Jayachamaraja Wadiyar when the members of the Mysore royal family including the King and his courtiers offered pujas to the tuskers at Maasthi Gudi or Maasthamma Temple near Antharasanthe in H.D. Kote taluk.

All along the route, band sets and traditional tribal instruments were played to signify the beginning of the festivities and people used to offer jaggery, fruits and sweets to elephants. The Gajapayana was discontinued after the Privy Purse was abolished when the Kings and Queens became titular heads.

The vanishing tradition was revived in 2001 when S.M. Krishna was the Chief Minister and A.H. Vishwanath, a Mysurean himself, was the Mysuru District Minister from Veeranahosahalli Gate. Since then, Gajapayana has been diligently observed.