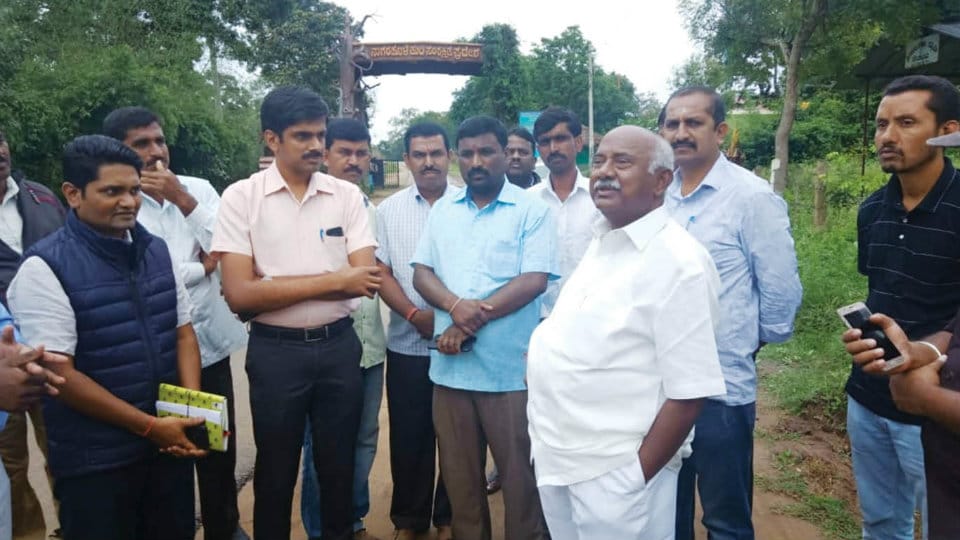 Mysuru/ Hanagodu: A team of officials from the Forest Department and the District Administration, led by Dasara Special Officer Abhiram G. Sankar, who is also the Mysuru Deputy Commissioner, visited Veeranahosahalli Gate this morning and discussed the arrangements to be made for Gajapayana, the march of elephants from jungle camps to Mysore Palace.

The Gajapayana will be held on Sept.2 and the Dasara elephants will be welcomed to the Palace on Sept.3.

Hunsur MLA A.H. Vishwanath was also a part of the visiting team. Till now, the annual Gajapayana was being held at Nagapura Girijana Ashrama School and this time, it will be held at Veeranahosahalli Gate. It was in 1999-2004 when Vishwanath was a Cabinet Minister, the concept of Gajapayana was floated and implemented.

Since then the Veeranahosahalli Gate was the venue of Gajapayana where pujas would be performed while elephants are sent to Mysore Palace. But since the last three to four years, the Gajapayana venue was shifted to Nagapura Tribal School due to some reasons. This year, the event will return to Veeranahosahalli Gate, its original place as Vishwanath is a Hunsur JD(S) MLA and even holds the position of State JD(S) President and has a say in this matter.

The team of officials, who visited Veeranahosahalli this morning, examined the place and directed the ground-level officers to clean the area and get ready for the event.  Mysuru Deputy Conservator of Forests (Wildlife) Sidramappa Chalkapure, Hunsur Conservator of Forests Ravishankar, Tahsildar Mohan Kumar and Range Forest Officer Ananya Kumar, who is in-charge of Gajapayana and others were present.