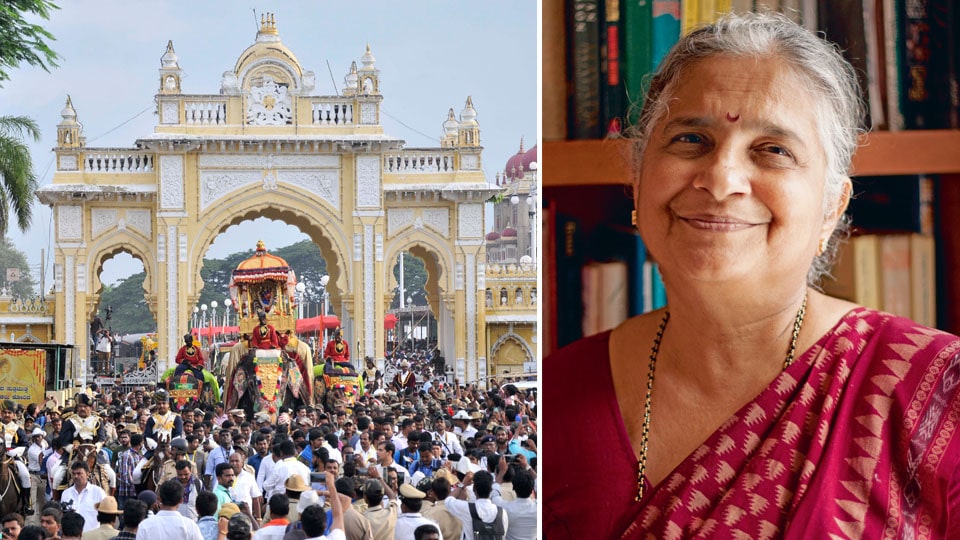 Addressing a press conference after presiding over the Dasara High Power Committee meeting at the Government Guest House in Nazarbad yesterday, Chief Minister H.D. Kumaraswamy (HDK) said that official invitation will be extended to Sudha Murty to inaugurate.

Dasara is the State festival of Karnataka and is organised every year in Mysuru. Numerous cultural events and functions are organised during the ten days. The traditional Dasara procession will be on Oct.19, the day of Vijayadashami where the idol of Goddess Chamundeshwari is placed on a golden howdah on a caparisoned elephant and taken in a procession along with tableaux, dance groups, music bands, horses and camels.

The five-kilometre long procession starts from Mysore Palace and culminates at Bannimantap, where the Banni tree is worshipped. The festivities culminate on the night of Vijayadashami with a Torchlight Parade, locally known as Panjina Kavayatthu.

The CM said that this year Dasara festivities will be held in a simple and traditional manner due to devastation in Kodagu district due to floods.

Tourism Minister S.R. Mahesh has plans to generate revenue of Rs.100 crore and he is planning attractions like Palace on Wheels, Heritage Tours, Museum on Wheels, 3D projections, special Dasara programmes at Somanathapura and Chunchanakatte, the CM said.

The symbolic march of the elephants ‘Gajapayana’ will be flagged off on Sept.2, where the first batch of Dasara elephants led by Arjuna, which will carry golden howdah during Jumboo Savari, from the jungle camp will march towards Mysuru. The elephants will be welcomed to the Palace on Sept.3 where they will be trained for the procession.

Gajapayana will commence from Veeranahosalli Gate on the outskirts of the Nagarahole National Park. 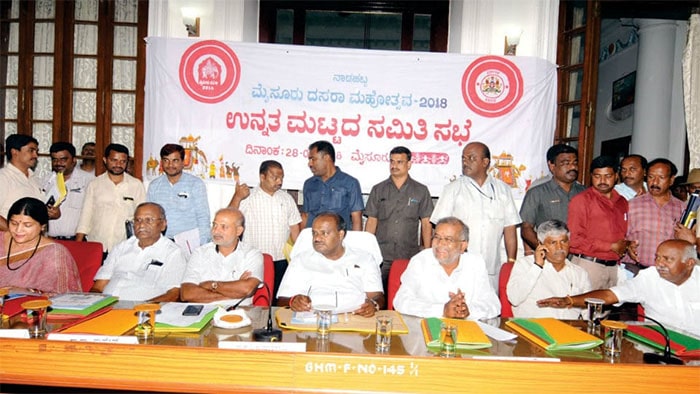 The CM said that it was also decided to attract more tourists and some of the programmes will be made permanent one like famous Dasara Exhibition which will be held for 90 days every year. This year, there are plans to increase the number of exhibition days. He said that the Government was also thinking to establish the Dasara Festival Authority and decision will be taken in the near future.

The newest entry to the festivities this year will be ‘Janapada Jathre’ for showcasing of the rich folk art and culture of the land. The Chief Minister said that there was no dearth of funds for the events and the Mysuru Deputy Commissioner, who will be the Dasara Special Officer, would have a free hand in organising the festivities.

On the Dasara grant, Kumaraswamy said that the District Administration would submit a proposal and accordingly, a grant would be released. Last year, a proposal for Rs.15 crore was submitted of which pending Rs.7.10 crore will be sanctioned this year, he said.

As every year, the attractions including Aahara Mela, Yuva Dasara and Dasara Sports will be held to showcase local talents and more money will be spent to beautify the city. The CM said that the Annual Dasara Exhibition will begin the very next day of the inauguration and the Karnataka Exhibition Authority will be asked to fill up the stalls at the Exhibition early. Other attractions to come up at the Exhibition include the contribution of Maharajas to the development of Mysuru region, he added.

Congress MLA Dr. Yathindra Siddharamaiah, party MP R. Dhruvanarayan were conspicuous by their absence. Chief Minister Kumaraswamy said that invitations were extended to them but for them, Urban Local Body Elections were more important than the meeting and were busy canvassing.