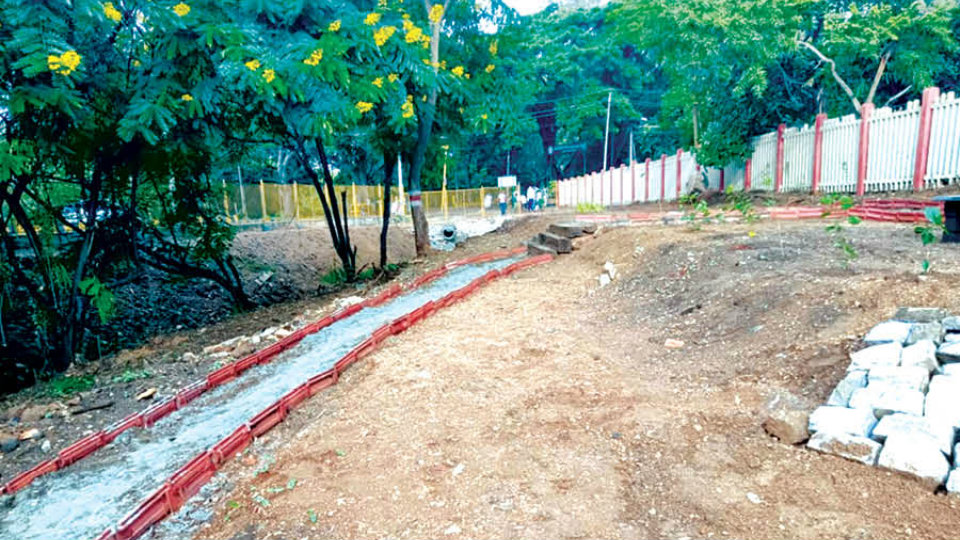 Mysuru: Marking the 150th birth anniversary of Mahatma Gandhi, the Mysuru Division of South Western Railway (SWR) had organised community service day recently along with the inauguration of Gandhi Park, Green Nursery and formation of human chain to create awareness against single-use plastic.

The theme of the human chain was ‘Say no to plastic.’

Also, floral tributes were offered to the portrait of Mahatma and a swachhata pledge was administered to the staff.

The three-acre Eco Park, dedicated to Mahatma Gandhi by Mysuru Division of SWR, is a story of transformation — from a ‘Gandha Nala’ to a  ‘Gandhi Vana.’

Till a month back, this used to be a badly abused storm water drain running through the Railway property. Years of garbage dumping had converted this 6 mts. deep and 150 mts. long valley into a veritable dump.

In response to the call for a Clean India, Aparna Garg, Divisional Railway Manager, Mysuru Division, responded by taking upon the Division to carry out a massive clearing operation and put up a protective fence to prevent future abuse.

After clearing and containing the mountain of garbage, approximately 1,000 kgs, the place was modified to give stability, ecological niche and aesthetic appearance.  Another unique feature of the Park is use of natural and recycled materials within the Park premises keeping with Gandhian philosophy of frugality and simplicity. The SWR plans to develop it as a Biodiversity Park by planting diverse variety of local plants and trees through ‘Shramdana’ involving the interested citizens.  U.N. Ravi Kumar is guiding the Railways in this endeavour.

‘Gandhi Vana’ is also a response to climate change action by converting a dump into a beautiful urban forest fostering biodiversity, a lung space and a vibrant ecosystem for next generation to appreciate and enjoy the posterity.