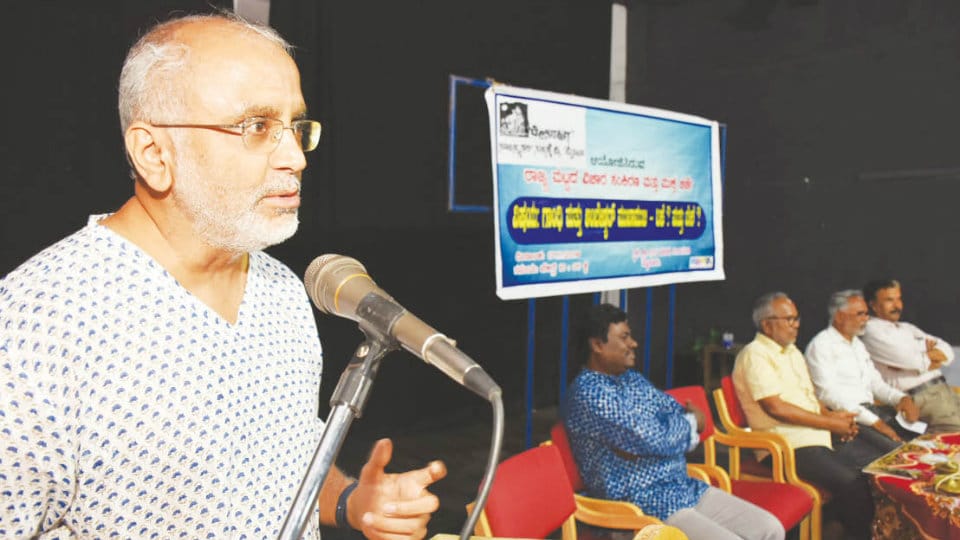 Mysuru: Alleging that efforts are going on currently to  erase Gandhian principles and Dr. B.R. Ambedkar’s ideals from the minds of the people, senior journalist and former ‘Outlook’ Editor Krishna Prasad said that Gandhiji and Ambedkar, the two great personalities of the country, were much needed today at a time when new challenges are cropping up.

He was speaking after inaugurating a seminar on ‘Gandhi and Ambedkar – Face to Face – Why and what for?’ organised by Desiranga Samskrutika Samsthe at Sriranga auditorium in Rangayana premises here yesterday.

Noting that it is a good development that Mysuru is hosting this seminar at a time when efforts are going on to keep Gandhi and Ambedkar out of the minds of the people, Krishna Prasad  said that Gandhi and Ambedkar had ideological differences primarily on six issues, including untouchability.

“When Gandhiji started Harijan Sevak Kendra, Ambedkar opposed it saying that the Sangha will be of not much help in bringing the oppressed communities to the mainstream society,” he pointed out.

Quoting Dr. Ambedkar’s interview to BBC Channel where he has explained his ideological differences with Mahatma Gandhi, Krishna Prasad said that the excerpts from the interview can be seen in YouTube social media platform even today.

Jagadish Koppa, an intellectual from Dharwad, said that although the paths treaded by the two great leaders were different, their goals were the same. “The two iconic personalities believed that the pains and sufferings of the downtrodden communities were their own,” he said.

Asserting that whatever differences the two personalities had can be considered only as ideological and nothing else, Koppa said that the two fought for the common cause of ensuring dignity to every citizen of the country.

Prof. Mahadev Shankanapura, an activist from Kollegal, said that it was imperative on our part to accept and honour the Mahatma for all the sacrifice he has made for the country. Maintaining that it was  wrong on the part of Gandhi to project himself as the sole leader of the country at the second Round Table Conference, Prof. Mahadev opined that this hurt the Mahatma’s image to a little extent then.

Pointing out  that Gandhi called Untouchability a sin while Dr. Ambedkar termed it as a crime, he observed that, however, the interpretation of  untouchability was the same.

Dr. Vaddagere Nagarajaiah of Bengaluru and others were present during the event.