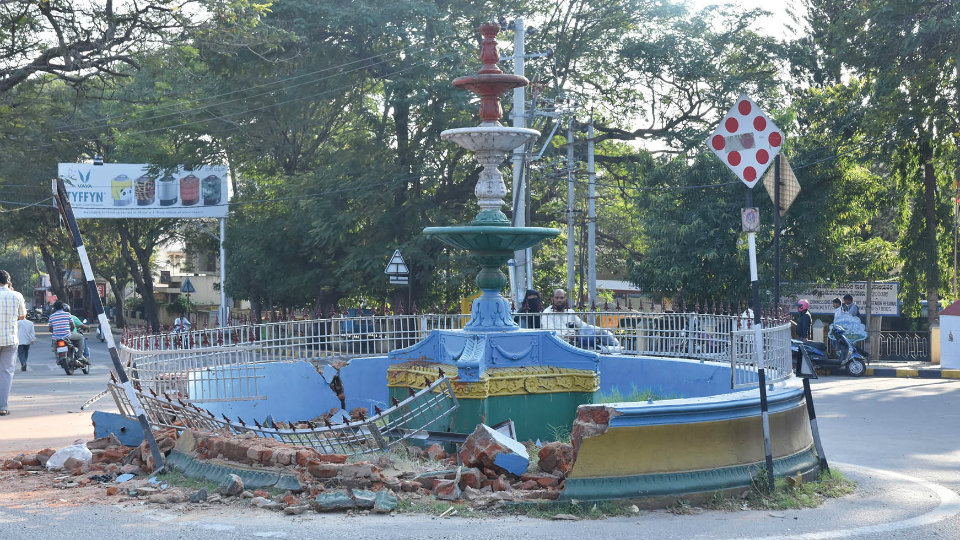 Mysuru: The RTO Circle (Srikanteshwara Iyer Circle) on JLB Road in city was damaged when a speeding car crashed into it in the early hours of Sunday morning.

Forty-five-year-old Bharath Sagar, a resident of Kuvempunagar , was driving his i20 car from Ramaswamy Circle side on JLB Road at about 3.45 am when he rammed his car against the Circle after reportedly failing to notice it due to the glittering headlights of a vehicle coming in the opposite direction.

Sagar, who escaped unhurt in the mishap, drove straight to nearby K.R. Traffic Police Station and left for home after telling the Police that he will pay up for the damages caused to the Circle, it is learnt.

Meanwhile, MCC Commissioner Gurudatta Hegde told SOM that he has directed the concerned Zone-1 and 2 Assistant Commissioners and  MCC Engineers to inspect the spot and submit a report on the extent of damages caused to the Circle.

Also, he has instructed  the officials to lodge a complaint at the Traffic Police Station against the car owner for having caused damage to public property, he added.