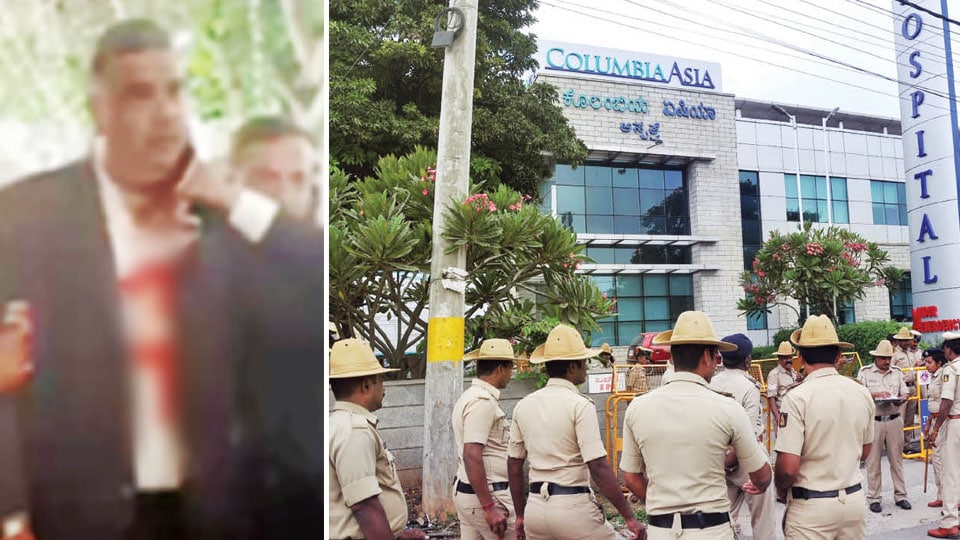 Mysuru: An assailant struck NR Constituency Congress MLA and former Minister Tanveer Sait with a machete in a bid to murder him in front of hundreds of people at the wedding reception of the MLA’s close aide’s son at Bal Bhavan premises in Bannimantap here last night. The incident has sent shock waves in the city.

The seriously injured MLA, who was bleeding profusely from his neck, was rushed to Columbia Asia Hospital, where he is undergoing treatment at the Intensive Care Unit (ICU).

Soon after striking the MLA with a machete on his neck, the assailant tried to flee but was caught by guests present at the wedding reception. He was later handed over to NR Police.

The attacker has been identified as Farhan of Ghousianagar in city.

Following the brutal assault and tense situation, the Police have tightened security at the Hospital, Police Station where the attacker is lodged and also at Bal Bhavan premises by deploying additional Police personnel.

About the incident: Tanveer Sait, along with his family members, had gone to attend the wedding reception of his close aide Younus’ son. The formal wedding had taken place in Madeena.

Assailant was wearing red shirt: Sait, after blessing the newly-wed couple on the stage, climbed down and was sitting in the front row listening to live music when the assailant wearing a red shirt casually walked towards Sait.

Those sitting with the MLA in the front row and others around him, including Sait’s gunman thought that the said person may be one of Sait’s followers who had come to greet him. But the assailant, in a fraction of a second, pulled out the machete and struck heavily on the left side of Tanveer Sait’s neck, threw the machete and mobile phone and fled from the spot.

Meanwhile, former Corporator Suhail Baig, who was one among those who witnessed the incident, raised an alarm screaming, ‘catch him, catch him.’ Soon the guests apprehended the attacker before he could flee from the venue.

Beaten black and blue: When the crowd came to know that the person they had caught had assaulted Sait, they  beat him (assailant) black and blue. He was later bundled into a Police jeep and taken to the Police Station.

Assailant slips on carpet: The assailant, who tried to flee from the spot, slipped and fell on the carpet before being caught by a Home Guard, who was on duty at the spot with the help of other guests.

Addressing the media at the Hospital this morning, Dr. Upendra Shenoy, Consultant, Cardio Thoracic and Vascular Surgery and Chief of Medical Services, Columbia Asia Hospital, Mysuru said that the MLA was immediately attended to by a team of doctors last night and surgery performed.

He said that Sait suffered grievous injuries on his neck which has damaged his veins, nerves and internal organs in his neck. The bleeding is under control now and drugs are being administered to control his Blood Pressure (BP). Also, blood transfusion was done as he (Sait) had lost blood due to the injury, the doctor added.

Dr. Upendra Shenoy said that the MLA is at present in a critical state and has been put on ventilator. He is being closely monitored by a team of doctors at the ICU. Once his condition is stable, the future course of treatment would be decided, he said and added that Tanveer Sait has been kept under observation for 48 hours.

Meanwhile, City Police Commissioner K.T. Balakrishna, who spoke to media persons near the hospital this morning said that the Police are investigating in all angles and added that they cannot jump into conclusion now.

Stating that a few suspects  have been taken into custody by the Police, he added that the city is peaceful.

Meanwhile, many political leaders cutting across parties visited the Hospital and enquired about the health condition of Tanveer Sait.

Speaking to the media, MP Pratap Simha said that Police should take stringent steps to  prevent such incidents.

Dhruvanarayan said that the attack on a people’s representative was shocking and urged Police protection to all netas.

Seven taken into custody, hunt on for five more

According to NR Police, during their initial interrogation of the assailant Farhan last night, he confessed to the attack and when asked about the motive said that he had met Tanveer Sait many times seeking a job but the MLA had not helped him.

He also added that even when he requested the MLA for help with other issues, his requests were ignored and this angered him to attack the MLA. But sources say the motive is more complicated than just disgruntlement as confessed by Farhan.

Meanwhile, NR Police have taken seven people into custody this morning as they are  suspected to be involved in the incident. While the seven suspects are being interrogated, the Police have formed four teams to hunt down five more suspects.

Police believe these five were also involved in the attack on the MLA last night. In fact, Police had set up road blocks around Bannimantap area to check if Farhan had a get away vehicle waiting for him.