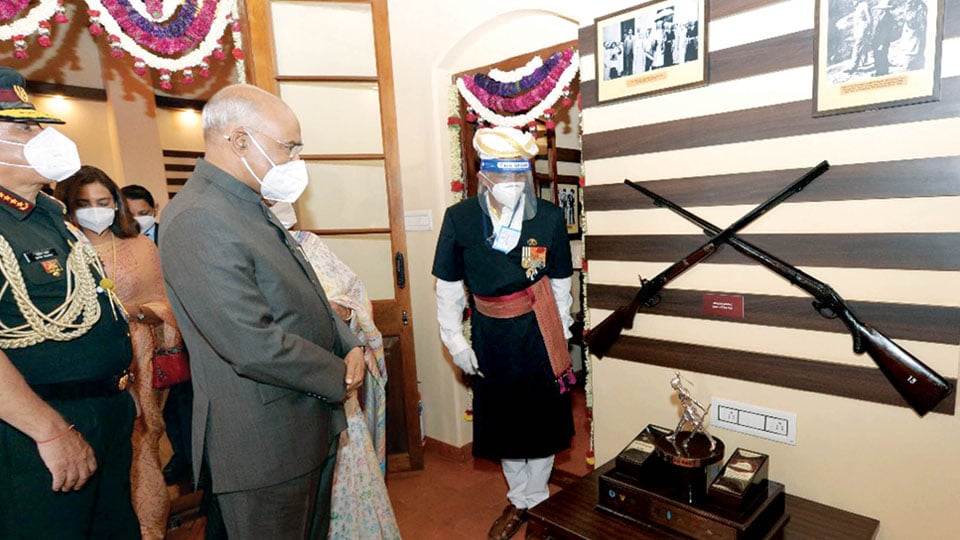 Madikeri: A museum celebrating the life of former Army Chief General Kodandera Subayya Thimayya, housing a variety of antique weaponry and war relics, was inaugurated last evening by President Ram Nath Kovind. First Lady Savita Kovind was present along with the President. Their daughter Swati Kovind too was present.

“Sunny Side,” the erstwhile ancestral house of General Thimayya, who served as the Chief of Army Staff from 1957 to 1961, has been renovated and converted into the museum in Madikeri, Kodagu. The museum showcases memorabilia, including weapons and military uniforms and houses ‘Himmat,’ a battle tank at the entrance in addition to a supersonic fighter jet, MiG 21, both of which were used in the 1971 war.

Soon after the inauguration, the President’s Office tweeted: “Glad to inaugurate the General Thimayya Museum at Madikeri in Kodagu, Karnataka. It has preserved special aspects of the extraordinary character and contribution of one of the finest soldiers in the history of our army.”

The President unveiled the inaugural stone at the Museum and went around observing the war memorabilia on display. A statue of the General from Kodagu in uniform greets as one enters the museum, which also showcases a slice of Indian military history.

To guide the visitors, there is a first person narration, explaining the articles and artefacts kept there. Reflecting on the humility General Thimayya, there is a picture showing him riding a Lambretta scooter.

There is also a mural showing Field Marshal Claude John Eyre Auchinleck, who was a British Army Commander during the Second World War, coming down to “Sunny Side” to meet General Thimayya. A War Diary that has been preserved inside the museum narrated the stories of various wars fought by the Indian military.

The museum also acknowledges the contribution of General Thimayya’s siblings, including two of his brothers, who too were Army officers and his wife Nina, who was bestowed with ”Kaiser-e-Hind” award in recognition of her work in public service. Decades-old arms and ammunition, Army guns and rifles, besides a collection of artwork featuring the valour of soldiers on the battlefield, books and articles are among other things on display.

The President also paid his respects at the war memorial. Chief of Defence Staff General Bipin Rawat, General Officer Commanding (GOC) and Colonel of the Kumaon and Naga Regiment Lt.Gen. Rana Pratap Kalita were among those present at the inauguration.

General Thimayya Museum preserves special aspects of the extraordinary character and contribution of one of the finest soldiers in the history of our army.  The memorabilia at ‘Sunny Side’, once the residence of General Thimayya, highlights the sterling features of our brave forces. District Kodagu has the honour of having enriched our Armed Forces with stalwarts like General Thimayya and Field Marshal Cariappa. I am sure that this museum will inspire our youth to carry forward the legacy of General Thimayya.

Message of Chief of Defence Staff

Chief of Defence Staff (CDS) Gen. Bipin Rawat wrote in the visitor’s register: This is a historic occasion as we recall the fine professional, soldierly and officer like qualities of late General Thimayya. An icon, the great solider will ever remain close to the hearts of every Indian Army solider, serving or veteran, he will continue to inspire us in the future.

MLC Shantheyanda Veena Achaiah handed over a memorandum to the President and requested him to award Bharat Ratna posthumously to Field Marshal Kodandera Madappa Cariappa and General Kodandera S. Thimayya.

She mentioned in the memorandum that both Cariappa and Thimayya were proud sons of Kodagu. Cariappa was born at Shanivarsanthe on Jan. 28, 1899. On Jan. 15, 1949, Cariappa became the first Commander-in-Chief of the Indian Army. He held the five-star rank of Field Marshal, the highest honour in the Indian Army, which Sam Manekshaw is the only other officer to have held.

Gen. Thimayya was born on March 31, 1906 and joined the Army as a soldier. He rose to the rank of General by sheer merit and hard work. Bestowing Cariappa and Thimayya with Bharat Ratna for their outstanding contribution to the nation would be a befitting tribute to the officers, Veena Achaiah said in the memorandum.