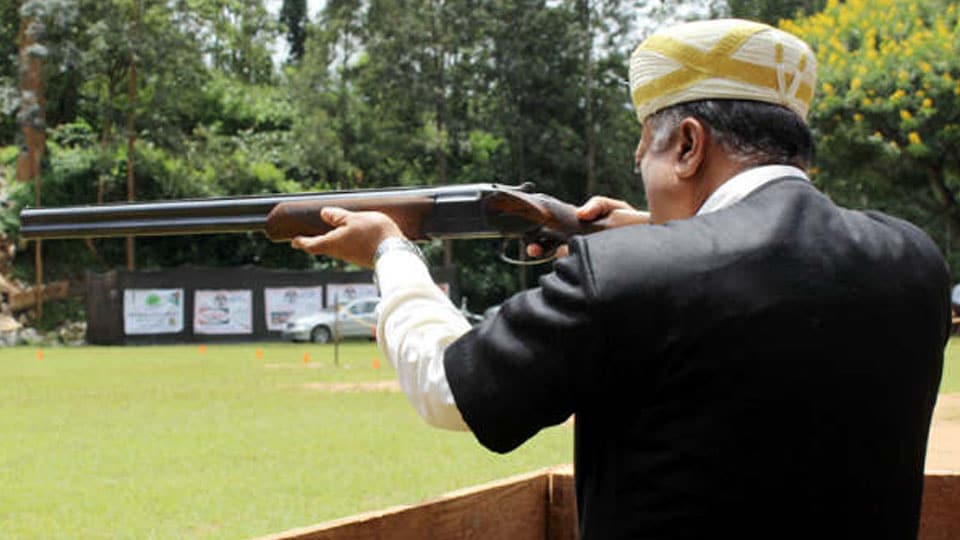 Echo of Writ Petition in High Court over gun license exemption to Kodavas: Kodava Samajas gear up for legal battle

Madikeri:  The Writ Petition questioning the exemption to Kodavas and Jamma land holders in Kodagu district from obtaining a license to possess firearms under Section 3 and 4 of the Indian Arms Act, 1959, that was filed before the Karnataka High Court has gained attention in Kodagu and representatives of Kodava Samajas are preparing for a legal battle.

The petitioner, Captain (Rtd) Yaladalu K. Chethan, son of Yaladalu D. Keshavananda has filed a Writ Petition in the High Court on Jan. 8, 2018 and a Bench comprising Chief Justice Dinesh Maheshwari and Justice P.S. Dinesh Kumar has posted the hearing after the summer vacation.

The special privilege to own firearms without license was granted to the Kodavas by the British in recognition of their martial traditions. This was continued after independence by a notification issued by the Union Government in 1963 which exempted “every person of (the) Coorg race and every Jamma land tenure holder in Coorg” from the Indian Arms Act.

In his petition, (WP No. 1386/2018), Chethan, a resident of R.T. Nagar in Bengaluru, claimed that the continuation of the exemption, granted to some class of persons by the British government in pre-Independent India in furtherance of their divide-and-rule policy, was unconstitutional, as it was based on irrational, fictitious and discriminatory grounds, such as race and ancestral land tenure.

He said that the exemption granted to Jamma holders and for the members of Kodava race under Section 3 and 4 of Indian Arms Act differentiates between communities living in a society and promotes disharmony.

Reacting on the Writ Petition, President of Akhila Kodava Samaja Mathanda Monnappa told Star of Mysore yesterday that they were preparing for the legal battle and the Federation of Kodava Samajas has given powers to Bengaluru Kodava Samaja to take on the issue in the High Court.

On its part, the Bengaluru Kodava Samaja has entrusted the responsibility to senior advocate M.M. Nanaiah and his team. “We have also spoken to advocate Sajjan Poovaiah and former Minister M.C. Nanaiah and they have assured us of all legal help and assistance. Senior Advocate A.K. Subbaiah has collected several documents regarding the gun rights of Kodavas and they will be produced before the High Court for consideration,” Monnappa said.

Appealing to the Kodava community members not to air their views on social media platforms as the matter is sub-judice, Monnappa said that they will take the issue to the logical end and preserve the rights granted to Kodavas by the British.

“To resolve the issue without complications, on behalf of the Gowdas, we spoke to Chethan. But we did not get a positive response from him. Our contention is that the exemption provided to “Kodavas by race” must be provided to all original inhabitants in Kodagu. We are not demanding the scrapping of the special privilege granted to Kodavas under the Arms Act,” he said.

EDITOR’S NOTE: For Kodavas, gun is not only for protection from wild animals in those past early centuries but also an important weapon of worship in their religious practice and family life. Respecting these sentiments, Britishers merely legalised it under the Arms Act. Earlier, this exception under the Arms Act extended to other communities holding lands under a tenure known as “Jamma”, a privileged land.

However, after “Jamma” was abolished in 2011 or so during the days of K.G. Bopaiah, then BJP Speaker of the Assembly, Jamma holders are naturally disqualified to enjoy the exemption under the Arms Act and only Kodavas by race are enabled to enjoy this privilege.

2 COMMENTS ON THIS POST To “Echo of Writ Petition in High Court over gun license exemption to Kodavas: Kodava Samajas gear up for legal battle”