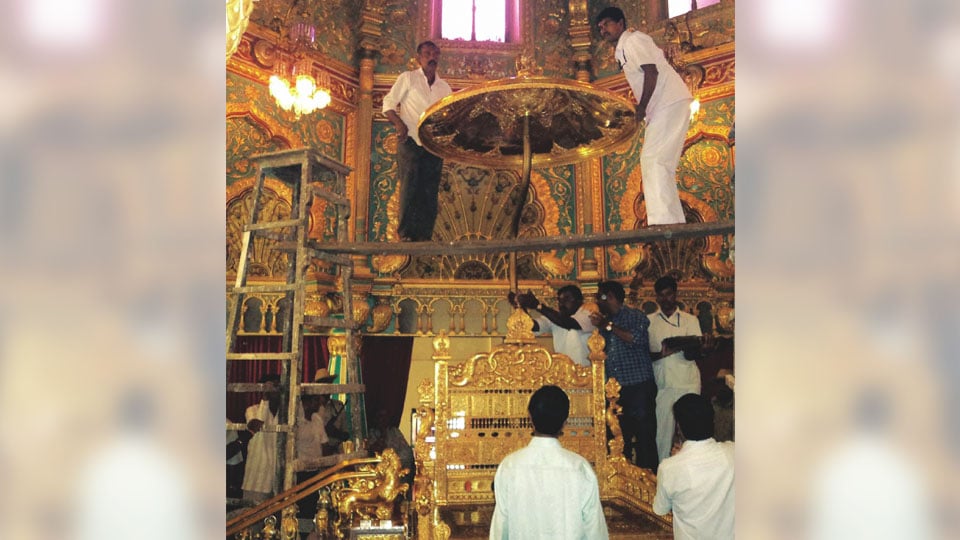 Mysuru: The diamond-studded Golden Throne (Suvarna Simhasana) was assembled at the Durbar Hall of Mysore Palace amidst tight security here this morning with just a week left for the 408th edition of Dasara festivities.

Earlier, the 13 parts of the Golden Throne kept under tight security at the Palace were taken out from the strong room after a group of 16 Palace priests led by Shyama Jois performed Ganapathi Homa, Navagraha Homa, Mruthyunjaya Homa, Vastu Homa, Chandika Homa and Chamundeshwari Puja before offering the Poornaahuthi.

As a security measure, all those involved in assembling work were not allowed to use mobile phones  and CCTV cameras installed at the premises were covered with clothes.  The Palace Board had also restricted the entry of visitors to Palace between 10 am and 1 pm today.

The assembling of idols of Simha (Lion) to the throne will be done on the first day of Navaratri (Sept. 21) between 7.55 am and 8.15 am. Kankana to Yaduveer will be tied on the same day between 8.20 am and 9.10 am after which the Royal Elephant, Royal Horse and Royal Cow will be brought to Sawar Thotti. At 12 noon, the priests will commence the kalasa puja and other rituals before Yaduveer ascends the throne between 12.45 pm and 12.55 pm.

Saraswathi Puja will be performed on Sept. 27 followed by Ayudha Puja on Sept. 29. The same day will also mark the end of Khas Durbar at Palace.

Vijaya Yatre and Shami Puja will be performed on Sept. 30 (Vijayadashami) and the dismantling of Golden Throne will be held on Oct. 14 between 10.45 am and 11.45 am.

In view of Dasara festivities, certain restrictions have been imposed on the entry timings to Mysore Palace. The visiting hours to the Palace on Sept. 21 and Sept. 29 is from 1.30 pm to 5.30 pm.

On Vijayadashami Day (Sept. 30), no visitors will be allowed to the Palace.

On Oct. 14, the Palace will be open for visitors with restricted entry to few floors  between 10 am and 1 pm.